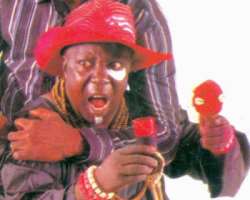 Ogun State was thrown into confusion last Friday when it witnessed a horror that has left it shaken. One of the wives of the late Yoruba movie actor, Isola Durojaiye also known as Alasari, identified as Adeola, met her death when a truck crushed her in Adatan area of Abeokuta.

The woman was going about her business when this happened. She was reported to be coming down on a bike when the truck crushed her from behind and she died on the spot.

“The truck crushed the woman from behind as she was trying to disembark from an okada. She died instantly,” an eyewitness said. She has been buried at late Alasari's home at Elega, in Abeokuta on Saturday morning amidst tears.

It was the state Police Public Relations Officer, Muyiwa Adejobi who had confirmed this death. He said, “The accident occurred at Car Wash in Adatan on Friday, where a truck crushed a woman to death. We later got to know her identity as the wife of the late Yoruba actor and movie producer, Ahmed Isola Durojaiye popularly called Alasari.”

We pray that the family find solace in this dark moment of their lives. The family has not spoken about this death.