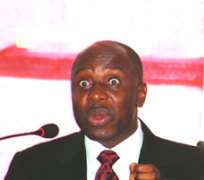 "Conformity is the jailer of freedom and the enemy of growth." -John F. Kennedy

Politics in the South-South and South-East of Nigeria has long been domiciled in the deep pockets of self acclaimed elites. So, trouble started when a 'peasant' (no thanks to the loquacious Femi Fani-Kayode and co), emerged on the political stage of southern Nigeria. Worst of it all is that Rt. Hon. Chibuike Rotimi Amaechi as Governor of Rivers State, came on board with a political philosophy that ran at par with that of his predecessors and their cronies.

Against advice from political associates, the Ikwerre born politician embarked on capital intensive projects that naturally reduced the usual 'share the money' inside Rivers State Government House, Port Harcourt. The era of thick 'thanks for coming' brown envelops filled with crispy Naira notes, was abruptly cut short for good.

Apparently vexed by Amaechi's courageous attempt at reversing backward politics in Rivers State and beyond, a cabal of displaced politicians teamed up with some forces in Aso Rock to assassinate his character and destroy his political base.

Firstly, they dragged the political structure of Rivers State off his feet, even when he was still the Governor. Secondly, even before Amaechi left the Peoples Democratic Party (PDP), this band of detractors developed and disseminated a warped narrative of an over ambitious man, who wanted to push Jonathan out, so that he would become Vice President, and tied it on his neck.

They didn't stop there. When Amaechi finally left the Peoples Democratic Party (PDP) for the All Progressives Congress (APC), and lent his support to the presidential candidature of Muhammadu Buhari, these political terrorists pushed up their biased theories to unacceptable heights of tribalism and religious bigotry.

It is on record that people actually made comments saying that it was 'wrong' for Amaechi to support a Hausa/Fulani Muslim against a Southern Christian. In fact, in so many fora during the 2015 electioneering period, the present Governor of Rivers State, Nyesom Wike, made several tribalism tainted remarks where he maliciously alleged that Ameachi was using Rivers money to fund the presidential campaign of a Hausa candidate - Buhari, and the activities of a northern party - APC.

One sin that nobody, even the devil, can hold against Amaechi is tribalism or religious bigotry. In spite of the fact that he is a devout Catholic and seasoned Ikwerre man, you will find no single trace of discrimination or marginalisation in his actions or inactions. This is a widely known fact.

This Writer believes that any man or woman who hates another person simply because of religion, race, politics, or any other man-made boundary, is not fit for public office. A very important litmus test for leadership is an individual's ability to accommodate diverse religious, cultural and political heritages. Perhaps, this was one of Amaechi's sins.