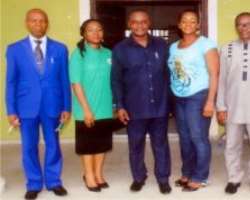 This was the staked consensus by members of the community who gathered at the Rumuolumeni community Town Hall to listen and learn on how to key in to the USAID objective.

To some stakeholders who spoke, climatic advocacy and good environmental behaviours begins with faith in the processes that has been learnt. They explained that all can be champions of the earth If everyone all passionately believe and contribute to a safer environment and be part of the motivation and sensitization effort as the USAID has done in collaboration with the African Centre for Environment Protection, adding that. If we all do our part in adapting our daily habits, together, we can make a difference in saving our planet.

The USAID sponsored event carried out in collaboration with the African Centre for Environmental Protection (ACEP) also witnessed the chairperson of ACEP, Mrs Kaine Chinwah advocating for more awareness and enlightenment programmes to check incidences of pollutions in the Niger Delta.

In a seminar presentation she harped on the preservation of the Ecosystem in Rumuolumeni Community saying that most environmental problems in the Niger Delta are caused by ignorance.

She noted that Rumuolumeni community is prone to flooding as a result of its landscape hence the people of the community need to be enlightened on the dangers of building houses on water right of ways as well as the indiscriminate dumping of refuse in unapproved areas.

Mrs. Chinwah said that human activities have caused great damages to the environment, adding that time has come, when both the governments and other organizations should step up the enlightenment campaigns on the preservation of the environment.

The ACEP chairperson also enjoined the people of Rumuolumeni to guide against all actions that can destroy their environments.

She also urged for the protection of water bodies while three planting programme should be vigorously pursued to protect the environment.

In his presentation, Dr. David Ogbonna of the Rivers State University of Science and Technology (RSUST) Port Harcourt stressed the need for the people of Rumuolumeni to maintain good environmental practices to protect their biodiversity.

Dr. Ogbonna warned against blocking of drainages as well as indiscriminate cutting down of trees.

He said that since the community is prone to flooding efforts should be made to ensure the free flow of waters to the river.

He commended the African Centre for Environmental Protection for complementing government efforts in the preservation of the ecosystem.

Also speaking, Director in the state Ministry of Local Government Affairs, Mr Samuel Nwokogba, said that the ministry is ready to support any organisation whose activities will impact positively on the people. He also said that the increase in construction activities in the area has underscored the need for the people to jealously protect their environment from

USAID has been in the forefront of helping communities better manage and benefit from their natural resources by: Supporting land tenure policies and resource rights, giving people the right to own and manage natural resources responsibly; Fighting deforestation and planting trees, so that forests continue to provide clean water and air, improve agricultural productivity, slow the rate of climate change, counter desertification, and support economic growth; Protecting biodiversity, so that people don’t lose essential goods and services generated by intact and functional ecosystems.

USAID are also involved in mitigating and adapting to the effects of climate change, so countries can grow without harming the environment while strengthening their resilience to warmer temperatures and weather shocks.