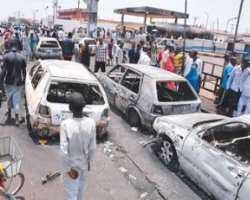 THREE people were reported to have died, while 10 vehicles got burnt in a fire disaster that gutted an NNPC filling station at Unguwar Mu'azu in Kaduna metropolis.

Nigerian Tribune gathered that the fire started in the evening of Saturday and lasted several hours.

According to an eyewitness, the incident occurred when a fuel tanker was discharging its content and one of the compartments of the tanker was leaking fuel in the process of discharge.

The eyewitness said: “Unfortunately, the fire was triggered from the fuel which flowed to the main road, engulfed eight cars and two commercial buses on queue.

“The tanker and the fuel station got burnt, as well as a girl and two men.

“Attempt to bring the fire under control by shop owners and residents of Kinkinau GRA and Unguwar Mu'azu, where the fuel station is located, proved abortive,” he added.

A shop owner, who pleaded anonymity, revealed that “we were afraid, thinking that the fire might spread to our shops and houses.

“Fire fighters from the Kaduna State Fire Service and the Kaduna Refinery and Petrochemical Company (KRPC) came to extinguish the fire.”

An official of the Kaduna State Fire Service, who would not like his name in print, confirmed the death of the three people.

He, however, said the remote cause of the fire was not known, calling for a proper investigation into the matter.

Meanwhile, the Kaduna State governor, Nasir el-Rufai, has said he was shocked to receive the news of the passing of three people, which occurred during a fire incident in one of the NNPC filling stations at Unguwar Mu'azu, Kaduna, on Saturday.

In a statement issued on Sunday, by his media aide, Mr Samuel Aruwan, remarked that “Governor el-Rufai received the news with shock and expressed heartfelt condolences on behalf of the government and people of Kaduna State, to the families of those that lost their lives.

“The governor prays that God grant them eternal rest and their families, relations and associates fortitude to bear the unfortunate passing away of their loved ones.

“The governor and the people of Kaduna State also pray for the recovery of those who survived the incident with severe wounds and those that lost their vehicles and property to the fire inferno.

“The government is also using this medium to appeal to all those involving in selling the products to desist, as it is important citizens take issues related to environmental hazards and security seriously.”

The statement also stated that Governor el-Rufai has directed security agencies to investigate the immediate cause of the fire incident, with a view of averting future occurrence.