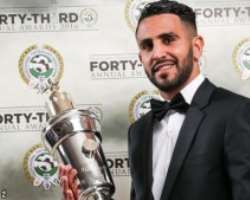 Mahrez has scored 17 goals and made 11 assists in 34 league games to take Leicester to the cusp of the title.

The award was voted for by the Algeria international’s fellow professionals.

Analysis: ‘I voted Vardy but Mahrez deserves it’

Premier League season in numbers for the PFA Player of the Year nominees: