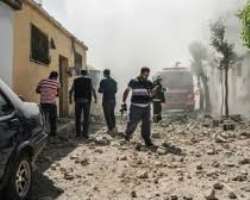 Two rockets fired into Turkey from an area of Syria controlled by the Islamic State group hit the border town of Kilis on Sunday, leaving 16 people injured, media reports said.

One of the rockets hit the roof of a house in the Okcular neighbourhood while the other hit a backyard. Six of the wounded were Syrian.

Residents marched on the governor's office in Kilis in protest, only to be dispersed by police, the Hurriyet Daily said, adding that marches and protests had been banned for a month by the city's officials.

In the last few weeks, IS jihadists have repeatedly fired rockets at the town in the southeast of the country — the only place in Turkey where refugees from Syria's five-year conflict now outnumber local Turks.

On Monday, just such an attack left five Syrians dead, including four children, when a rocket ripped through their home.

Turkey has responded to each of the strikes on Kilis by destroying the launching positions of the jihadists with howitzer fire.

Turkish officials have repeatedly lauded the hospitality of people in Kilis towards Syrians as an example of how Turks are hosting the 2.7 million Syrians who have fled their country's civil war.

On Saturday, after a visit to the region with top EU officials, Prime Minister Ahmet Davutoglu insisted once again that 'Turkey will respond with force' to attacks on its territory.

Neither IS nor the Al-Qaeda-affiliated Al-Nusra Front are included in a Syrian truce brokered by the United States and Russia that came into force in February.

Washington has applauded Turkey's role in the anti-IS coalition but US officials on occasion have urged Ankara to do more. The Guardian