How I met my husband on Facebook – Judith Audu 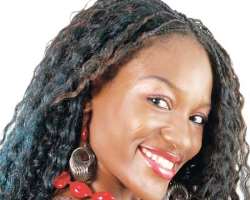 Nollywood's fast rising talent; Judith Audu has her fingers in many pies. She is an actor, budding producer, OAP and a blog­ger and holds a first degree in French and a Masters degree in Public & International Affairs from the University of Lagos. An indigene of Edo State,

Audu cut her teeth with Theatre 15, a de­funct theatre group, when she got admission to study at Unilag. Though Judith got her break in 2004 when ASUU was on strike, she quit shortly after to pursue her education only to return in 2011. In this chat with Entertainer, Judith talks about her career and how she met her hubby on social media among other issues.

Excerpts:
How did you come into acting?
I took acting seriously when I got into the University of Lagos after I joined a theatre group, Theatre 15. It was the most renowned at the University of Lagos back then. I got on screen in 2004 by chance when school was on strike; I guess I just dabbled into it. However, I left the same years but came back in 2011. Truth is I just couldn't handle it because I was in my final year and combining acting with schooling was quite challenging so I stepped on the breaks. However, I was still doing Fun Time where I played a major role. Fortunately, during my service year, I was Drama Director for NYSC, Kebbi State. After my service I was still trying to run away from acting but the desire to act kept haunting me. Then I went for my masters in Public & Interna­tional Affairs at the University of Lagos. And while there, most people I had worked for in the past started calling me up again and I before I knew it I was back fully.

How did your folks react when you told them you wanted to pursue a career in acting?

I am very thankful to my family. I am from a home where they support you in whatever you want to do as long as it is legal. Nobody kicked against it; they did not have a problem with it. They were like 'if that is what you want to do, why not chase it?' They are my number one fans today.

Tell us about your background?
I grew up in the barracks; Navy Town, Ojo, Lagos to be precise. My dad was a naval officer and my mum is a business­woman. We are three and I am the only girl between two boys. I had an awesome childhood. If I were to rewind the tape of my life, I would go straight back to when I was a child; my childhood was fun. It was really good; I felt I had everything I needed as a child. I was more into myself. I am a very shy person; I grew up as very shy so it is funny I ended up in the make belief world.

How did you overcome your shy­ness?
I started off modelling, I loved taking pictures; I am a picture junkie. And I have always admired broadcasters because back then when we were much younger, if you wanted to know the latest style in town, just take a look at broadcasters. In fact, I had wanted to be a broadcaster. However I also had a love for actors. I love Regina Askia and Liz Benson. In fact, in secondary school, I was actually going to look for them at Dolphin Estate, Lagos. I went after Regina Askia because I knew she lived there. I wanted to be an actor but I didn't know how to go about it so I was like 'what if I look for these people? Maybe, they will put me through.' So I would go and stand by Dolphin Estate gate, wait­ing to see if Regina Askia will drive out or not; it was that bad (laughter). I knew I wanted to do this but the question was, how do I get into this world? Also, I didn't want to fall into the wrong hands because I was not sure what I was supposed to do so I was also cautious. Back then, at a studio where I loved taking pictures just for the fun of it, the photographer revealed to me that he had used my pictures for a calendar job. He showed me the calendar and said he was paid for it. He told me that the person behind the calendar job wanted more of my pictures. Before then he was always encouraging me to go into modelling. That was how I started modelling after I enrolled at a modelling school where we were taught catwalk and lots of stuff regarding modelling. I did runway and I became very outspoken. Whenever there was an issue my classmates always pushed me forward to represent them. That way I felt I could talk and began to build my confi­dence and getting into the theatre just sealed it for me.

You seem to have a finger in every pie, how do cope?

(Laughter) I try to balance them. You just saw me working on my laptop; I am done acting for today. I am now trying to write stuff for my blog. Once I am done with the write up, I am headed straight to the radio station for my show. I find a way to make sure none of them suffers but in all of these, my first love is acting. Acting takes priority and the radio show comes next and after that, producing. I am also a wife. I have a husband that I have to take care of. However, if I am to place all these on a list of priorities, my role as a wife comes first, next is acting, followed by my OAP job and then, producing and blogging.

Is your husband supportive of your acting career?

He is actually the most supportive person in the world. But for him I would have pulled out. Most times when I get discouraged and I don't feel like doing it anymore, he tells me 'this is what puts smiles on your face, this is what you love doing, you should keep doing it. It may be tough but when you get there you will be on top.' He is the most amazing person alive.

How did you guys meet? (smiles)
We actually met on facebook. We are one of those lucky people social media has helped and impacted their lives. He wasn't a Nigerian then; my husband is a foreigner. He wasn't in the country when we met on social media and started chatting up. And we did that for about three years and then he came around and we dated for about four years before we got married, we are in our fifth year of marriage.

How has the marriage been so far?
Awesome! It is the best thing that ever happened to me aside being an actress.

Any kids?
I don't talk about that part.
What are your dreams?
I want to be a force to reckon with not just as an actor but also as a producer. I want to do quality stuff and be an employer of labour so that I can change perceptions people have about the industry. - The Sun.