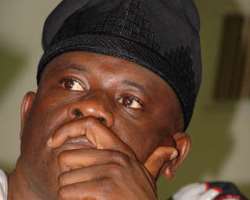 A libel lawsuit filed against SaharaReporters, its publisher Omoyele Sowore, Premium Times, and Punch newspaper by the former Minister of State for Defense Musiliu Obanikoro suffered another major setback today when the judge, Justice Oluwatoyin Ipaye, ruled against his application to prevent these publications from writing stories about him.

SaharaReporters first exposed Mr. Obanikoro, along with other top political leaders including Ekiti State Governor Ayo Fayose, for rigging the 2014 Ekiti State gubernatorial elections. Mr. Obanikoro was recorded on an audio tape agreeing to bribe Brigadier General Aliyu Momoh to prevent voters from the All Progressives Congress (APC) from making it to the polls. Mr. Momoh has since been sacked from the military upon the recommendation by a Nigerian army’s board of inquiry for his misconduct during that election.

During today's proceeding, Justice Ipaye stated that Mr. Obanikoro’s application lacked merit saying there was no evidence before the court that the publication defamed him.

She said that “It is an error to seek to restrain a publisher of an article on the grounds of libel if there is no proof before the court that such material is libelous. I am persuaded that this application has no merit and an injunction is not appropriate in the circumstance.”

Mr. Obanikoro’s attorney, Chukwudi Enebeli, argued that the publication of stories on the Ekitigate scandal has had political and personal losses on him.

A legal case against SaharaReporters at the Supreme Court of the State of New York is currently awaiting judgment as the judge is deliberating whether Mr. Obanikoro’s claims have any jurisdiction in the United States.

The Economic and Financial Crimes Commission (EFCC) recently announced that its investigation has found that Mr. Obanikoro, through an account belonging to his son, received money from the National Security Adviser Sambo Dasuki to rig the 2014 elections in Ekiti State.

A former People's Democratic Party chieftain in Ekiti state, Tope Aluko has publicly revealed that Mr. Obanikoro personally brought a huge stash of cash amounting to N4.7 billion to the state on the eve of the gubernatorial election to be shared between political party operatives and security agents involved. Yesterday, officials at the EFCC told Saharareporters they have traced N1.2 billion naira to one of the participants, Iyiola Omisore, a former Senator and gubernatorial candidate in Osun state.

Mr. Obanikoro and his family are currently hiding in the Georgia United States away from these investigations and legal proceedings.