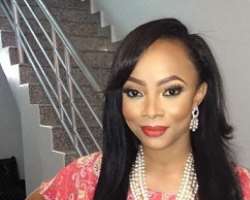 Toyin Aimakhu has been trending for a while now, especially after her breakup with Segun Egbegbe.

She was criticized for leaving her marriage and starting up a new relationship in a short period of time and when her relationship with her lover ended, she was perceived as someone who never wanted a steady relationship.

The situation intensified when Segun Egbegbe granted an interview, stating that Toyin can't live under any man.

Since the interview went viral, some entertainers have been coming to defend the Edo born actress. The likes of freeze, Mercy Aigbe, and today Toke Makinwa joined the list.

Toke Makinwa has come out to show her support to the actress, and definitely, as time goes on, more entertainers might likely join in.

In her words: “people think vulnerable is a sign of weakness but it takes a lot of courage to wear your pain on your sleeve. I celebrate your fearless nature, keep rising through it all.”