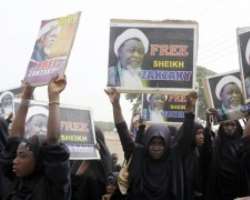 The Nigerian military has been urged to “come clean” over the deaths of 350 civilians who are alleged to have been shot or burned alive and then dumped in a mass grave following a confrontation in the north of the country last December.

A new report from Amnesty International, which includes witness testimony and satellite images of a possible mass grave, accuses the military of illegally attacking members of the Islamic Movement in Nigeria (IMN) and then trying to cover up the atrocities.

Between 12 and 14 December last year, more than 350 men, women and children belonging to the Shia sect are thought to have been killed in the town of Zaria in Kaduna state . Violence erupted after IMN supporters – some of whom were armed with batons, knives and machetes – refused to allow an army convoy to pass along a road close to the group's headquarters.

The military has claimed that the vehicle carrying the Nigerian chief of army staff, General Tukur Buratai, was attacked with a petrol bomb and that the convoy came under fire. IMN members, however, have denied the claims.

After the initial clash, the military is alleged to have surrounded areas in which IMN members had gathered and begun to fire at them both deliberately and indiscriminately.

Zainab, a 16-year-old schoolgirl, told Amnesty: “We were in our school uniforms. My friend was shot in her forehead. We took her to a house where they treated the injured but, before reaching the house, she already died.”

Other witnesses described raids on two buildings inside the residential compound of the IMN's leader, Ibraheem Zakzaky, saying soldiers targeted a makeshift clinic and morgue there.

A 22-year-old student called Alyyu told researchers he was shot in the chest outside the compound and taken inside for treatment, only to find the clinic under assault later.

“There were lots of injured people in several rooms,” he said. “There were dead bodies in a room and also in the courtyard. Around 12-1pm soldiers outside called on people to come out, but people were too scared to go out. We knew they would kill us. Soldiers threw grenades inside the compound. I saw one soldier on the wall of the courtyard shooting inside.”

Another witness said he saw soldiers setting fire to the clinic later that afternoon. Despite suffering serious gunshot wounds, Yusuf managed to drag himself away. Others were less fortunate.

“Those who were badly injured and could not escape were burned alive,” he said.

“I managed to get away from the fire by crawling on my knees until I reached a nearby house, where I was able to hide until the following day. I don't know how many of the wounded were burned to death. Tens and tens of them.”

Mobile phone footage thought to have been taken by IMN supporters shows bodies with gunshot wounds as well as charred bodies strewn around the compound.

According to the report, the military then closed off the compound and the surrounding area, razing sites, washing away the blood and sweeping up the spent cartridges. “Piles of bodies” were taken to the morgue of the Ahmadu Bello University teaching hospital, which was then sealed off for two days.

The bodies are believed to have been taken away later by truck and buried.

“There were five or six large trucks and several smaller military vehicles, and they spent hours digging and unloading the trucks' cargo into the hole they dug and then covered it again with the earth they had dug out,” said one witness. “They were there from about 1 or 2am until about 5am. I don't know what they buried. It looked like bodies, but I could not get near.”

Amnesty has identified and visited the location of a possible mass grave in the Mando area, near the city of Kaduna. Satellite images of the site taken the month before the attack and 10 days after show “disturbed earth spanning an area of approximately 1,000 square metres”. They also reveal the complete destruction of buildings and mosques.

Amnesty International's Africa research and advocacy director, Netsanet Belay, said “the true horror” of what had happened in Zaria over two days in December was only now coming to light.

“Our research, based on witness testimonies and analysis of satellite images, has located one possible mass grave,” he said. “It is time now for the military to come clean and admit where it secretly buried hundreds of bodies.”

A judicial commission of inquiry was established by the Kaduna state governor in January 2016 to investigate the incident. Amnesty is calling on the commission to protect witnesses and victims – and to publish the results of its inquiry.

Its report adds: “Without this, the culture of impunity that has allowed and encouraged gross human rights violations, including war crimes and crimes against humanity, to be perpetrated will remain pervasive.”

The Nigerian army, which described the report as “hasty, impartial and lack[ing] objectivity”, has called on Amnesty to let the judicial process run its course without comment or interference.

should be respected,” said a spokesman. “Already, a judicial inquiry

Commission. The NGO's hasty report – if true – is against the

judgemental. They must allow the judicial commission of inquiry and

all other relevant agencies to complete and submit their reports before

jumping to conclusion.”
He added: “Let the NGO search its conscience please.”

There have been frequent clashes between IMN and Nigeria's armed forces. Thirty-four of its members – including two of Zakzaky's sons – were killed in 2015 in an incident that, according to the army, was also sparked by activists blocking a major road.