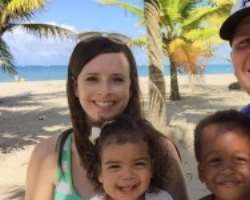 Courtesy of Aaron Halbert
As I have made the stroll from my wife's hospital room to the NICU these past few days it has been hard to fathom the way that our family has been put together.

This past Sunday, my gorgeous wife – a white evangelical, like me — gave birth to our beautiful African-American triplet daughters whom we adopted as embryos. These sweet girls will hopefully soon be coming home to meet their 3-year-old African-American brother and 2-year-old biracial sister, both of whom we adopted as infants. The normalcy of this paragraph is something I have come to take for granted. Yet what seems to us to be the logical outcome of being pro-life is still something that to others often needs much explaining.

I grew up as a child of evangelical missionaries in Honduras, very aware of racial diversity because I was the blue-eyed, cotton-topped white kid who stuck out like a sore thumb, but all the while felt deeply connected to the people there, even though we looked very different. My wife, on the other hand, grew up in the delta of Mississippi and it wasn't until she took a few trips to Haiti that the veil of racial prejudice was lifted from her eyes. One of the central themes of Christianity is, after all, that God, through His Son, is calling people from every tongue, tribe and nation. Grasping diversity will make the world stronger as we marvel at God's creative genius on display through His people's varying pigments, personalities and proficiencies. Our differences are cause for celebration, not scorn.

When we were still dating, a common bond that drew us together was the fact that Rachel and I both wanted to adopt. While we were fertile, we were both deeply convicted that one of the ways to be pro-life is to involve ourselves in adoption. Several years into our marriage, even as we were pursuing the idea of returning to Honduras as missionaries with the Presbyterian Church in America, we visited an adoption agency in Mississippi, where we were living at the time. We were also trying at the time to conceive naturally. Knowing that it is often more challenging to find adoptive homes in the United States for non-Caucasian children we informed the agency that we were willing to accept any child except a fully Caucasian child. We did this with the deeply held conviction that if the Lord wanted us to have a fully Caucasian child my wife would conceive naturally.

We see protection of children not as charity, nor as part of a political agenda, but as something near to the heart of God. Because every human life bears his image, all life –no matter how young or old, no matter the stages of development — has inherent dignity and value. The Scriptures testify that God has always pleaded for the protection of his most helpless and needy image-bearers. Another prevalent theme of the Bible is that God adopts believers into his own family. When we adopt, we are echoing his own compassionate work, giving the world a glimpse of the truth and beauty of the gospel.

What is embryo donation?
The use of embryo donations is increasingly becoming an option for couples and individuals who want to conceive a child. Here’s what you need to know about it. (Claritza Jimenez/The Washington Post)

When we began the adoption process we knew race could play a major role in our family dynamics, which led us to ponder deeply what a racially diverse family would look like. We believe when you look into any human's eyes, you look into the face of an image-bearer of God – into the eyes of a person whose soul is eternal. While that is the common thread of all humanity, it doesn't mean our racial differences are insignificant. We see the human family's varying physical characteristics as awesome reminders of God's creative brilliance. It's not that we think race doesn't exist, or that we don't see it. In fact, it's the opposite – we see it, and we embrace it.

There is something beautiful and enriching being the only white face sitting and chatting with some of my African-American friends as my son gets his hair cut on a Saturday morning. There is also something wonderful in the relationship that is built as my wife asks a black friend on Facebook how to care for our little biracial daughter's hair. The beauty of a multi-ethnic family is found there, in the fact that the differences are the very thing that make ours richer and fuller. It forces you to think in a new way about the way you think, speak, act and live.

But, we knew, especially in the South, that a white couple with non-white children would draw a myriad of different reactions. There will always be the older white woman in Walmart who stared at us with sheer disgust, or the African-American mother who looked at us and just shook her head. However, there was also the young black girl who wept when we told her this little boy with her skin color was our son, and the older white doctor who lovingly prayed over him and held him so tenderly. These latter experiences were rays of hope reminding us how far our country had come, while the former experiences reminded us how far we still need to go.

It was our commitment to the protection of the unborn and to the idea of continuing to add to our family that led us, last year, to the National Embryo Donation Center, a Christian embryo bank. With our adopted children keeping us busy, we hadn't been exactly looking for anything to add to our already-full plate. However we had recently run into a couple who highly encouraged us to look into embryo adoption. We were deeply moved by the idea of adding more children to our family by rescuing these tiny lives created from in-vitro fertilization, and intrigued by the thought of Rachel getting to experience pregnancy.

We live in a world with hundreds of thousands of embryos frozen in the United States alone. Most who aren't selected by their biological parents are donated to science or destroyed or kept frozen. If Christians – or others – really believe life begins at conception, it follows that we should respond by being willing to support embryo adoption and even take part in it ourselves.

When we met with the NEDC, we were again faced with the question of what ethnicity we would choose for our adopted embryos. We wanted additional siblings to feel connected to our first two children racially, and asked the team at the NEDC if we could be matched with African-American embryos. They agreed with our thoughts about our kids matching each other racially and were supportive of the decision to select African American embryos.

In September of last year, we had two embryos implanted and began the long wait to see whether the transfer was successful. The day to visit the doctor could not come fast enough. Six weeks after the transfer we made a very nervous trip to the local hospital in Honduras, where we were serving as full-time missionaries. We began to describe everything to our doctor in Spanish (broken Spanish, that is). He asked us a few times if we were sure that we had transferred two embryos. Yes, of course we were sure, we said. However, one of those embryos had split in two inside Rachel's womb. She was indeed pregnant- not only with twins, but triplets!

It's been heartening to see virtually all of our friends and family express overwhelming support for our family and the unusual ways we've built it. In our minds, we are just living out our dream. A dream that may not look like the average family, but one that we are thankful could come true in light of our country's history. It's especially encouraging to see so many of our fellow millennial evangelicals now placing a high priority on life, adoption and multi-ethnic families.

Acts of Faith newsletter
Conversations about faith and values.
I felt sheer delight during this pregnancy watching my son and daughter, with his dark brown skin and her with the ringlet hair and slightly tan skin, kiss my white wife's growing belly. Each evening they said good night to those three growing little girls in her belly, and now they get to finally say sweet dreams to their baby sisters — face-to-adorable-face.

This is not the way we planned it 12 years ago when we were dating and talking about adoption, but oh, how thankful we are for God blessing us with these sweet little ones He has placed in our care. I can remember a friend going through the adoption process telling me he had always wanted his family to look like a little United Nations. As I look at my growing family, I prefer to take it a step further, daring to hope that our family picture is a little hint of Heaven.

Aaron Halbert is a missionary serving in Tegucigalpa, Honduras.