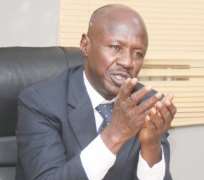 The EFCC is probing her role in how billions was withdrawn from the Central Bank of Nigeria (CBN) and paid into the accounts of six chieftains of the Peoples Democratic Party (PDP) and the Goodluck Support Group (GSG).

She allegedly owns an account, titled “Joint Trust Dimension Nigeria Limited” in which a substantial part of the funds was lodged. Cash was disbursed to party chieftains from the account, according to investigators.

But most of these individuals have denied involvement in the money sharing.

There were strong indications last night that all those who got the slush funds might be picked up by the anti-graft agency.

Mrs Usman reported at the Lagos office of the agency and was immediately taken into custody for interrogation.

“We may relocate her to Abuja but for now, she has been detained in Lagos.

“She was said to have received the sum of  N2.5 billion out of the over N4 billion which was transferred out of Central Bank of Nigeria into various individuals and company's accounts

“In addition, the sum of N140 million cash was allegedly paid  into her Zenith Bank Account in January 2015.

“Some of these funds are said to have been traced to her personal account and her company's account which she used to acquire properties in Abuja.”

A top source conversant with the deal, which landed the ex-Minister in trouble, said: “Mrs Usman was the Director of Finance of the Presidential Campaign Committee for the re-election of ex-President Goodluck Jonathan. At the prompting of the former President, N4billion was withdrawn from the CBN under the guise of security needs for disbursement to party chieftains.

“The cash was transferred into the account of Joint Trust Dimension Nigeria Limited, a company traced to Mrs Usman, where it was later shared to various individuals and organisations for purposes that are not stated.

“Nenadi, who made a statement to EFCC later went abroad on an undisclosed mission.

“Her trip slowed down investigation because as a vital coordinator, she ought to reappear for further interrogation. This development made the EFCC to watch-list the ex-minister.”

The source gave insights into how the funds were remitted into the accounts of the seven suspects.

He added: “Fani-Kayode was the chief beneficiary of the disbursement as he allegedly received N840million, paid in three tranches into his Zenith Bank, Maitama branch account with No.1004735721.

“Next is Goodluck Support Group, which allegedly received N320million

“Falae allegedly received N100m through Marreco Limited, a company where he is Chairman. The fund was credited into the company's United Bank for Africa Plc account No. 1000627022 on March 25, 2014.

Okey Ezenwa got N100million.”
The EFCC yesterday confirmed the arrest of a Permanent Secretary in the Ministry of Labour, Dr. Clement Illoh, to whose Zenith Bank N316 million traced to.

A source said: “The EFCC in the course of investigating the Technical Committee for Ratification of MLC of Nigeria Maritime Administration and Safety Agency (NIMASA) discovered that the sum of N14.1 million was paid to Clement & Bob Associates.

“Further investigation revealed that the said company, Clement & Bob Associates, belongs to Dr. Clement Illoh, where he is the sole signatory.

“It was further discovered that  the sum of N49 million and N13 million were also paid into Clement & Bob Associates account  from the now defunct Subsidy Reinvestment Programme, SURE –P.

“Illoh has been unable to provide satisfactory answer on how he came about the said N316 million in which he has the sum of N200 million in fixed deposit and over N16 million as balance in Zenith Bank.

”The EFCC also discovered that Illoh purchased property worth N75 million from Aso Savings and Loan, Abuja using the name of his wife, Rose.”