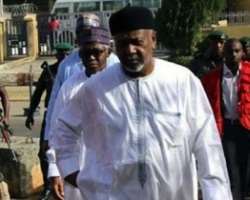 The trial of the former National Security Adviser, Colonel Sambo Dasuki (rtd) was stalled today at the Abuja High Court for the failure of the federal government to release him on bail as order by several courts since December 2015. His lawyer claimed that his continued detention by agents of the federal government has prevented him from accessing his lawyers for defence in criminal charges filed against him by the government.

The trial scheduled to hold today before Justice Peter Affen could not hold as Dasuki maintained that he has not been able to brief his legal team because of his continued detention since last year after being granted bail by three different courts.

Dasuki’s counsel, Mr. Ahmed Raji SAN, however filed a motion on notice before the court asking for the order of the court to direct the federal government or any of its agents acting on its behalf to provide him adequate time to prepare his defence in the 19 count charges of offences filed against him and which he had been admitted to bail.

In the motion dated April 19, Dasuki prayed the court to compel the federal government to give access to any counsel of his choice during working days between Mondays and Fridays at J.B Daudu Legal Chamber in Abuja pending hearing and determination of the motion on notice filed at the court of appeal to stay proceedings at the Abuja High Court.

The former NSA also prayed the court to order the federal government to provide adequate facilities for him in order to enable him study the charge and bundle of evidences attached to the charges against him.

The new motion was predicated on five grounds which include that he stands for trial on a 19 count charge of offences that he had been admitted to bail and under Section 36 (b) of the 1999 Constitution he reserved the right to adequate time and facilities from the preparation of his defence.

Dasuki also claimed that he needed at least 20 interactive and instructive sessions with his lawyers on record, or any counsel of his choice in the preparation of his defence for trial.

In a 13-point affidavit in support of the motion and sworn to by one Ahmed Usman, it was averred that Dasuki was admitted to bail on December 21, 2015 and subsequently met all the bail condition that he was released but was immediately rearrested by the operatives of the Department of State Security Service (DSS) without any court order.

At the resumed hearing today, EFCC Counsel, Mr. Olaoluwa Atelagbe told Justice Affem that he has been served with a copy of Dasuki's motion praying for access to his lawyers.

The EFCC counsel however requested for an adjournment to enable him to react to the motion.

Meanwhile the motion has been slated for May 25, 2016 for hearing.