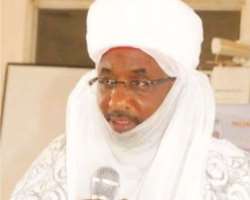 The Emir of Kano, Alhaji Muhammadu Sanusi II has called on the 19 Northern governors to do everything possible to ensure that the lost glory of the New Nigerian Development Company is restored.

He made the call when a delegation of NNDC’s Board of Directors, led by the Wali of Dutse, Alhaji Bashir Dalhatu, paid him a courtesy visit at his Palace in Kano on Monday.

He said that the call was necessary in order to promote socio-economic development in the region in particular and the country at large.

He added that “restoring the company’s lost glory will facilitate socio-economic development in the North in particular and Nigeria as a whole.

According to him, the task of making the company vibrant and formidable cannot be realized without the collective effort of the governors.

The call is necessary in view of the urgent need for the governors to come together for the realization of the desired objective, Emir said.

He also urged the Federal Government to come up with a blueprint that would ensure speedy industrial development in the country.

He stressed the need for the Federal Government to provide more assistance to the people of North East.

He noted that “the people of the North East are in need of more assistance from the Federal Government and it will greatly reduce their sufferings.

Earlier in his remarks, the Chairman of the NNDC Board of Directors had told the emir that the delegation was at his palace to brief him on the activities of the company and to seek for his fatherly advice on how to move the company forward.

He commended the emir for his consistent support and advice to the management of the company.