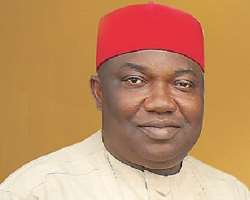 The Enugu State Government says it is prioritizing its development paradigm to focus more on neglected areas and communities whose environments cry for government intervention.

Governor Ifeanyi Ugwuanyi explained this when he played host to the people of Nomeh Unataeze Community, Nkanu East local government area, who paid him a courtesy call at Government House, Enugu, assuring them that they will not be left out in the grand plan by his administration to develop all the parts of the state within the limits of government resources.

He said that experts would soon be sent to such areas to examine the nature of work to be done in line with the state government project development agenda aimed at extending democracy dividends to rural dwellers.

The governor explained to the visitors that his administration was frantically exploring avenues for growing the economy of the state better, a reason it put together the just concluded International Investment Summit.

On political appointments, Governor Ugwuanyi assured the people of the area that some of their sons and daughters would be accommodated to balance the political equation of the council area.

Commending the governor for his human oriented projects and open door policy, the leader of the community, Hon Uche Anichukwu, enjoined him to extend his laudable democracy dividends to the area, especially access roads to enable the community take their crops to urban areas.

In his words, 'We want to appreciate you for being accessible, for making governance participatory, for transforming our state from a land of volatile and protracted political feuding to one flowing with stability and political harmony'.