Over 80,000 Nigerians To Be Deported From Cameroon As Bindow Seeks Support From Fed. Gov’t And Int. Agencies 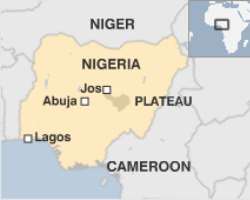 Ahead of the deportation of over 80,000 Nigerians from Cameroon Republic, through Adamawa state, the Adamawa state government has called on the Federal Government as well as International Donor agencies to come to the rescue of the state noting that the state government cannot single handedly shoulder the responsibilities of catering for the teeming deportees.

The call came through the state's commissioner of information Comrade Ahmed Sajoh when he alongside the Federal Government delegation visited the proposed site where the deportees would be hosted.

Sajoh noted that the call has become imperative in view of the sheer size of the deportees and the nature of the proposed camp which he said need complete rehabilitation.

He noted that even providing a perimeter fencing on the facility will cost the state enormous funds let alone providing other basic infrastructure noting that the state government has serious financial constraint facing it especially in consideration of the cash crunch facing the country.

Sajoh added the state government has already constituted a committee which will liaise with relevant stakeholders to see how best to tackle the issue including profiling of all deportees in order to ensure water tight security around the facility.

In his reaction, the Adamawa state camps coordinator of National Emergency Management Authority (NEMA) Saad Bello noted that his organization has made adequate arrangement to ensure that the deportees are adequately catered for.

He noted that the camp would need about 15 motorized boreholes and a number of hand pumps to take care of the water needs of the deportees as well as hundreds of toilets noting that the challenges of hosting the deportees was enormous.

In his reaction leader of the delegation and Senior Special Assistant to President Muhammadu Buhari on Policy, development and Analysis Ibrahim Bapetel urged the various stakeholders to prepare a comprehensive needs report for onward transmission to the federal government.

He said that due to the federal governments concern over the plight of the deportees he was optimistic that the the needs report will be treated with despatch.

Bapetel noted that the size of the deportees is so large urging International donors to also come to the assistance of the federal government in addressing the myriads of challenges that will accrue in handling the deportees.