BELGIAN BID TO BAN ‘RACIST’ TINTIN IN THE CONGO 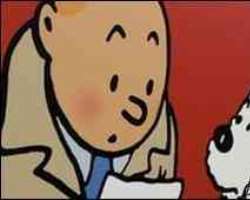 A Congolese man is trying to get a controversial Tintin book banned in the cartoon star's home country of Belgium.

The ginger sleuth's “little (black) helper” in Tintin in the Congo is seen as “stupid and without qualities”, Bienvenu Mbutu is quoted as saying.

“It makes people think that blacks have not evolved,” said Mr Mbutu, who lives in Belgium.

A court is to rule on whether the book can be sold in Belgium and, if so, whether it should carry a warning.

It has already attracted much criticism for its crude racial stereotypes.

Second adventure
Three years ago, the UK's Commission for Racial Equality called for the book to be banned, saying it contained imagery and words of hideous racial prejudice.

A black woman is featured in the book bowing before Tintin and exclaiming: “White man very great. White mister is big juju man!”

Written in the late 1920s, it was the second Tintin adventure created by Herge, who later said it was a youthful sin which reflected the prejudices of the time.

A scene in Tintin in the Congo in which the eponymous hero gave a geography lesson to Africans about Belgium was later changed to a maths class.

Now UK editions are generally found alongside more adult books and are sold with a band of paper around the outside, warning the content is offensive.

While Mr Mbotu has asked for the book to be banned, he has said he would be satisfied if it was sold with a warning like the one used in Britain, says the BBC's Dominic Hughes in Brussels.