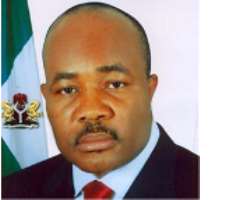 An Abuja based Lawyer, Barrister Ugochukwu Ezekiel has said that the recent publication in the media connecting the Special Assistant on Media to the Senate Minority Leader, Anietie Ekong was an orchastrated plot to blackmail him with the aim of extorting money from him.

In a Press Statement released in Abuja, Barrister Ezekiel said the lady who sponsored recent publication in the media to tarnish the image of the media aide of Senator Akpabio, was a serial blackmailer but that his client would not succumb to such cheap blackmail.

The statement reads in full:
“Our attention has been drawn to some online publications linking our Client, ANIETIE EKONG to one Ms Paula Lawrence, a well known online scammer who is alleging sexual harassment against our client.

“After painstakingly perusing the documents at our disposal and other evidence available to us (which evidence and documents would have been made available to the public but for the fact that the matter is currently sub judice), we have come to the following incontrovertible facts:

“The said Ms Paula Lawrence is an online scammer who preys on unsuspecting married men on the social media by sending her nude pictures to them and thereafter uses same to blackmail them into parting with reasonable amount of money.

“That of recent, Ms Paula turned her attention to aides of Former Governor of Akwa Ibom State and current Minority Leader of the Senate, Senator Godswill Akpabio and successfully duped a former ADC to Akpabio. After scamming him of reasonable amount of money, Ms Paula publicly taunted him on her facebook wall and threatened to blackmail him.

“Our discreet investigation has equally revealed that Ms Paula uses different names on the social media as the occasion demands to dupe innocent Nigerians. Such names as our investigation showed are Paula Eno Ukoh, Paula Angel Lawrence, Joy Ekong, Chika Julie Andrew etc. The general public are hereby put on notice as to her antics.

“Ms Paula tried unsuccessfully to dupe our client and thereafter made a demand of N50, 000,000.00 (Fifty Million Naira) from our client through a whatsApp message posing as a lawyer.

“That when our client did not bulge, Ms Paula resorted to blackmail by circulating her nude pictures, only to turn around to accuse our client of publishing same. Our client states that he does not have and did not and cannot publish the nude picture of a woman.

“She equally reported the same case at the highest echelon of the Nigeria Police Force, Force Headquarters, Abuja, demanding the sum of N50,000,000.00 (Fifty Million Naira) from our client but the Police after investigation dismissed her matter to be frivolous.

“Her current antics is aimed at tarnishing the image of our client and his boss, Senator Godswill Akpabio with a view to compel them to approach her for settlement and part with reasonable amount of money. THAT WILL NEVER HAPPEN. We sincerely believe that like all her previous antics, this shall fail and thereafter she would fully face the wrath of the law.

“On Wednesday, April 13, 2016, we approached the Federal High Court, Abuja where we received the incompetent processes she filed. She filed the suit since February 2016 but refused to formally serve same on our client but preferred to use the suit to blackmail our client and as a negotiation tool to get money of our client. When her plans failed, she secretly released the Court papers to the press.

“We shall respond appropriately to the suit in line with the laws of the Federal Republic of Nigeria, including but not limited to dragging her to Court for defamation of character.

“In view of the foregoing, and having brought the bare facts to the attention of everyone, we have been instructed to, without hesitation, drag anybody to court for defamation of character, who continues to make disparaging comments about our client that are not in tandem with the facts and documents concerning this matter.