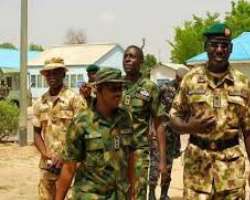 The Leader of the Shi'ites Islamic movement in Nigeria, Sheikh Ibrahim El-Zakzaky, directed his attorneys to sue  the Nigerian Army and the Chief of Army Staff, COAS, Lt-Gen. Tukur Buratai,  over illegal detention and violation of fundamental rights,

for which he is claiming N3bn as general and aggravated damages.

Festus Okoye, a counsel to the the Islamic Movement of Nigeria, said that he long with other lawyers got the brief  when they met with the leader of the Shi'ite.

Okoye spoke at a press conference in Kaduna on Thursday.

The lawyer said that the Shiite leader directed them to file a suit challenging his continued detention and violation of rights. They are claiming N3b as cumulative damage for their client.

Okoye said they had filed for  an order to compel the above respondents jointly to pay their client the sum of N1bn as general damages and another N2bn as aggravated damages for his illegal violation of his fundamental rights to life, dignity of his person, fair hearing, privacy and private property.

Another, who is part of the brief, Mr Kyon Maxwell,  disclosed that the the Shiite leadert has reportedly lost his sight.

According to him,  El-Zakzaky lost his left eye, while his right eye was severely damaged. He added that El-Zakzaky was quite frail and looked completely different from who he used to be before he was arrested by the army.

Okoye had also  disclosed  that the leader of the movement had no faith in the Judicial Commission of Inquiry set up by the Kaduna State government.

He said,  “His grouse was that the membership of the commission were mostly members that were antagonistic to the movement.

“The leader told us how can a person, who wrote a book against us and advocated that we should be killed and our schools destroyed, now be called upon to serve in a committee that will discuss the movement. How will that person be fair to the movement?” he asked.

“It was based on his directive that the legal team decided to institute a suit against the Nigeria Army and the Chief of Army Staff before the Federal High Court in Abuja, on April 11.

“Joined alongside the Army Chief as defendants in the suit are the Director-General State Security Service (SSS), Inspector-General of Police and the Attorney-General of the federation.”

He said rhat  El-Zakzaky has become a complete shadow of himself after the clash with the Nigerian Army in Zaria on 12th December 2015, saying that the spiritual  leader now walks with some assistance.

The activist leader claimed that El-Zakzaky and his wife, Zeenat, were shot by soldiers who raided their Gyallesu residence in the wake of the bloody clash which left several members of the movement dead.