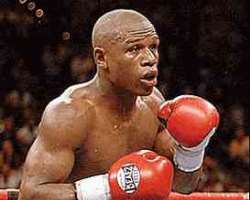 Mayweather
Floyd Mayweather has claimed he is better than Muhammad Ali and Sugar Ray Robinson ahead of his super-fight with Shane Mosley in Las Vegas on Saturday.

Mayweather, 33, is unbeaten in 40 fights but 38-year-old Mosley's WBA welterweight title is not at stake.

'What makes them (Ali and Robinson) any better than I am?' said Mayweather.

Mosley is widely expected to give five-weight world champion Mayweather - regarded by many as the best pound-for-pound boxer fighting today - one of his toughest fights.

Mayweather has not paid the World Boxing Association in order to sanction the encounter as a world title bout and his manager Leonard Ellerbe said, 'Floyd's already the best fighter in the world, why does he need to fight for a belt to prove that?'

Mayweather added that, while a victory over three-weight world champion Mosley would enhance his legacy, he rated his rival as merely 'a solid welterweight.'