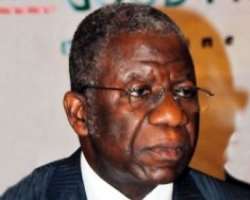 A former Head of the Civil Service of the Federation, Steve Oronsaye, allegedly spent Federal Government's N190 million he purportedly kept in a secret account while serving as chairman, Presidential Committee on Financial Action Task Force, an Abuja High Court was told on Wednesday.

Oronsaye was arraigned before the court on March 15, on a two-count of breach of trust.

He was alleged to have, between 2013 and 2014, defrauded the Federal Government of N190 million, using his position as chairman of PCFATF.

Oronsaye was accused of converting the N190 million to his personal use. He was said to have invested the fund in Access Bank Plc's Banker's Acceptance for a tenor of 90 days at nine and 12 per cent interest “in violation of extant financial regulations”.

A prosecution witness, Olubunmi Ojoko, an employee of Access Bank, said she served as an officer in charge of the account Oronsaye allegedly opened in the name of PCFATF without the approval of the accountant-general of the Federation.

She narrated how a former Head of Service, Mr. Stephen Oronsaye, personally withdrew the Federal Government's N190m, which he allegedly kept in a secret account in his capacity as the then Chairman of the Presidential Committee on Financial Action Task Force.

Ojoko was testifying as the second prosecution witness in Oronsaye's ongoing trial before Justice Olasunbo Goodluck of a Federal Capital Territory High Court in Maitama, Abuja.

The witness said she was the Access Bank's officer in charge of the account, which the former Head of Service was said to have unilaterally opened in the name of the Presidential Committee on FATF, without the approval of the Accountant General of the Federation.

She added that the existence of the account was also kept from other members of the committee.

Ojoko was called to the witness box when the first prosecution witness, Ngunnan Kakwagh, concluded her testimony, having been cross-examined by defence lawyer, Kanu Agabi (SAN).

Kakwagh, while testifying on March 15, claimed that Oronsaye operated the Access Bank account in the name of PCFATF and received N240 million from the CBN through the account.

Kakwagh said Oronsaye also made “five structured payments” of N9 million each, making a total of N45 million, into the account in one day in September 2013. She added that of the total N285 million, Oronsaye invested N190 million in fixed deposit and converted it with the accrued interest into personal use.

Led in evidence by lead prosecution lawyer, Ufom Uket, Ojoko gave details of how Oronsaye allegedly opened the Access Bank account on behalf of the PCFATF in 2012, without the approval of the AGF.

“He (Oronsaye) called me that he needed to open an account on behalf of the Presidential Committee on Financial Action Task Force.

“I met him at his residence in Asokoro, where I handed him the documents for the account, including the Access Bank account opening request of the committee signed by him, his passport photograph, copy of his passport and documents that set up the committee by the then secretary to the government of the federation.

“I scrutinised the documents and discovered that the AGF's approval was not included. So, I asked him for it and he said it was not necessary.

“I asked for the AGF's approval because it is needed when opening a government account. Since he said it wasn't necessary, I took him by his word. I took the documents to the bank and the account was opened,” the witness said.

Ojoko said she never met any other member of the committee, including Jalal Arabi, who served as PCFATF's secretary, throughout the period the account was operated.

She said he made the withdrawal, using cheques which he allegedly issued in favour of himself and various beneficiaries.

Ojoko added that besides“the direct withdrawals” by Oronsaye, “there were other various beneficiaries.

“After the first lodgement (of N50 million  from CBN) several cheques were drawn by the defendant (Oronsaye) in favour of various beneficiaries. The second inflow of N90 million was invested in a fixed deposit account. It was fixed in Banker's Acceptance, which is a form of investment, for 90 days at nine per cent.

“On maturity, the N45 million (the third inflow) had come and it was fixed for 90 days. Upon maturity, they (the investments) were usually rolled over on the instruction of Mr. Oronsaye and the interests credited into his current account.

“The N100 million (the fourth inflow) came in December 2014 and it was placed in fixed deposit in Banker's Acceptance for 90 days. The total investments and roll overs were about 28. About N150 million interests accrued on all the investments. Now the account is at zero balance after the N163.5 million in it was transferred to the Treasury Single Account,” the witness said.

The court later admitted in evidence, the account opening package, bank statements, mandate documents raised by Oronsaye and other documents relating to the account.

Justice Olasumbo Goodluck adjourned to today for defence to cross-examine the witness.

The Economic and Financial Crimes Commission had on March 15, 2016, arraigned Oronsaye on two counts of breach of trust, which he allegedly committed between 2013 and 2014when he served  as the then Chairman of the Presidential Committee on FATF. According to the charges against him,  he allegedly  defraudedthe Federal Government of N190m, using his position

Oronsaye was accused of converting the N190m to his personal use through the investment of the fund in Access Bank Plc's Banker's Acceptance for a tenor of 90 days at nine and 12 per cents interest rates “in violation of the extant financial regulations”.

The defendant, while still serving as the Head of Service of the Federation, was appointed as chairman of the PCFATF, which was set up to ensure the passage of the anti-money laundering bill and countering financial terrorism, among other terms of reference.