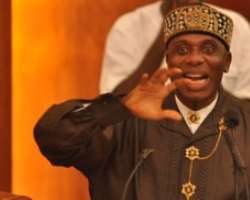 The Federal Government has risen in defence of Minister of Transportation Mr Rotimi Amaehi over the controversy on whether or not the Calabr- Lagos Rail line was in the original budget of the  government.

The Government, through the ministry of NBudget and National Planning, said that  the project was duly submitted and accepted by the National Assembly for approval.

National Assembly in the course of parliamentary debates and scrutiny of the Appropriation Bill expunged the project over claims that the project was not in the original budget.

Mr. James Akpandem, the Media Adviser to the Minister of Budget and National Planning,   in a statement on Tuesday,  insisted that the relevant committees of the parliament received the document.

His statement reads,  “In view of the recent controversies surrounding the 2016 budget, it has become necessary to state the following so as to set the facts straight: The details of the 2016 budget were received by the President on Thursday, April 7, 2016. Immediately this was received the President, desirous of signing the document into law as soon as possible, directed that copies should be made available to Heads of the various Ministries, Departments and Agencies (MDAs) of the Federal Government. Ministers were asked to go through the details and give their reactions as it affects their respective Ministries so as to guide the President and enable him sign the Appropriation Bill into law.

“That process is still on-going and no statement has been issued by the Executive on the matter, apart from the one by the Honourable Minister of Information, Alhaji Lai Mohamnmed, to confirm that details of the budget are being examined. No final decision has been taken by the President and no other statement whatsoever has been issued on the matter. With reference to the specific issue of the Calabar – Lagos rail project, we will like to state that the two railway projects, Lagos – Kano and the Calabar – Lagos, are very important projects of the present administration; and it was always the intention of the Executive to have both projects reflected in the budget submitted to the National Assembly.

“However, it will be recalled that the Budget Office made a number of errors in the initial proposals of a number of ministries. These errors were all corrected by the Ministry of Budget and National Planning and the corrected versions were submitted to the relevant committees of the National Assembly. This included that of the Ministry of Transportation.

“The amended Ministry of Transportation budget was accepted by the relevant committees and that was the version defended by the Minister of Transportation and his team. “It must be emphasized that the two rail projects are part of those for which the President is currently negotiating funding with the Chinese government. The N60b provided in the budget for the Lagos – Kano and Calabar – Lagos rail lines, respectively, is counterpart funding, to support the Chinese financing for the projects.

“These projects are part of the Strategic Implementation Plan of the government which was disclosed by the Minister of Budget and National Planning at the National Economic Council Retreat in March 2016, in the presence of state governors. They were also mentioned by the Vice President last week in Lagos at The Nation Newspaper's First National Economic Forum. “It is hoped that with this clarification, the raging controversy over the Calabar – Lagos rail project will be put to rest.”