GANI: THE ACTIVIST AND HIS UNDYING PRINCIPLES 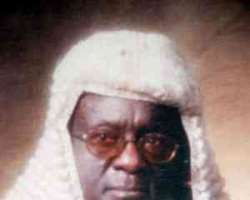 Some months before his death on September 5, 2009, Chief Gani Fawehinmi in an interview on a private television station challenged the now ailing President Umaru Yar'Adua to make public the true state of his health as the President was then embarking on one medical trip or the other.

The position of Gani, as fondly called, was borne out of sheer sincerity and love for his country. The late lawyer has set an example by disclosing his battle with cancer of the lung with the public after his daughter, Rabiat, revealed that he was diagnosed of the ailment in the United Kingdom.

Hence, he had the moral ground to advise the President to do same particularly for the interest of the country.

''The sickness I am battling with is cancer of the lung. It is a terminal disease no doubt, but with your prayers and the support of God, the terminal can be terminated'', he said.

This indicated the extent the lawyer would go in doing and demanding what is right during his lifetime. Many would have maintained that the issue of illness was a private affair, but not Gani. He felt he owed Nigerians a duty to tell them what his health status was.

He lived for the poor and the oppressed. Their battles were his. The rich who were denied justice also relished his large-heartedness. He continually demanded a good deal for the Nigerian people and a country devoid of corruption, nepotism and maladministration.

For that, he was detained many times in gaols and detention camps across the country. In fact, he fought all manners of injustice till he breathed his last. He also vied for the Presidency in 2003 on the platform of his party, the National Conscience Party earlier formed in 1994 to rally the progressives during the June 12 struggle.

Really, long before he was conferred with the highest national legal status of a 'Senior Advocate of Nigeria', the Students' Union of the Obafemi Awolowo University had honoured him with the 'Senior Advocate of the Masses' in recognition of his selfless struggles in ameliorating the plights of the oppressed and the poor.

Gani meant different things to different people. To those who persistently stand on the wrong side of history, he would probably be a pain in the neck. But those who preach the gospel of egalitarianism certainly saw him as a unique breed. His demise elicited emotions even as institutions and individuals described him in the best way they could capture his personality. Several persons thronged his Lagos residence when the news of his death hit the town to pay their last respect to the man who lived for others.

Then, Yar'Adua in his condolence message to his family described him as Nigeria's brand.

The President speaking through then Minister of Information and Communications in the dissolved cabinet before reconstituted by Acting President Goodluck Jonatha, Prof. Dora Akunyili, said, 'A Nigerian brand is gone. Gani was a human rights activist. He was an internationally renowned lawyer. He proved his activism in the law court to fight for the rights of the oppressed, the poor and the weak. Gani's numerous battles led to many positive developments in this country including the opening of the political space with the registration of many political parties. He did not just open the political space, he also participated. Gani raised the bar of the legal profession with is weekly law report. I pray, we pray that God will raise many more Ganis for us in this country. May his soul rest in peace''.

The former Chairman of the Economic and Financial Crimes Commission, Mallam Nuhu Ribadu was equally seen to be patriotic in the display of his love for the fighter. He came home from abroad in the face of tough trials he was experiencing. Many would not forget in a hurry the controversy generated by his homecoming. But he did it all for Gani.

He had said of him, 'Fawehinmi was a revered individual and his untimely death is a tragic loss to Nigeria, particularly at this moment in our history, but we must take consolation and celebrate his life as the father of modern day democracy in Nigeria. He was a true image of Nigerian unity, a pillar for the poor and a voice that spoke against the enemies of the people- the oppressors and the corrupt''.

The former governor of Lagos State, Asiwaju Bola Tinubu, was equally not left out of the praises for the man of the people. 'I would simply say Nigeria has lost its conscience, a rare patriot who just wouldn't resign himself to the rot around him'', Tinubu stated.

Born on April 22, 1938, last Thursday marked his 72nd posthumous birthday with many events lined up to commemorate the day. His Will was read that day to his wives, children and relatives by the Probate Registrar of the Magistrate Court 2 of a Lagos High Court. Though journalists were not allowed to cover the proceeds, it was later gathered that apart from making provisions for his widows, children and relatives, the late social crusader also ensured that beggars and the blind were not left in the Will. He particularly wanted them to be fed continually in his Lagos and Ondo residences.

In a chat with our correspondent at the chambers of his late father in Lagos after the Will was read, Gani's first son, Muhammed said that he left a Will that favoured all concerned just as he described him as a highly organised man.

He said, ''The Will is favourable and took care of everybody. Gani did everything in such a way that we felt he knew what each of us was thinking. I have applied for a certified copy of the Will for each member of the family so that everybody can have a personal copy to read''.

In his lifetime, he took care of those categories of human beings, upon his death they came to pay their last respect. And even after he was gone, he made provisions for them. This underscored his commitment to the principles he advocated while he was alive. Also, his love for education was deepened with the continuation of his scholarship scheme believed to have been instituted in 1973.

Same day, 40 students drawn from universities, polytechnics and colleges of education across the country were at his chambers in Lagos for the official presentation of the award.

At the event, many of the followers, associates and admirers of the deceased lawyer, spoke of him in glowing terms. The beneficiaries of the scholarship award also lent credence to the fact that the award was transparent in all forms. From the National Chairman of the NCP, Mr. Femi Falana, Mr. Segun Sango, Mr. Femi Aborisade, National President of the Academic Union of Nigerian Universities, Prof.Ukachukwu Awuzie and the President of the Nigeria Labour Congress, Mr. Abdulwaheed Omar, the speeches revealed the pure breed Gani was.

In his speech, the former President of ASUU and chairman of Gani Fawehinmi Scholarship board, Dr. Dipo Fashina said that members of the board encountered tough challenges in the process of selecting only applicants deserving of the scholarship as 'always wished by Gani''.

The former English teacher of the departed lawyer at Victory College, Ikare near Owo, Ondo State and Guest Speaker at the ceremony, Emeritus Prof. Eskor Toyo, said he brewed Gani Fawehinmi in two of his test tubes viz; communication ability and of patriotism and a human conscience.

Speaking on the topic: 'Education without illusion', Toyo identified nine types of 'mandatory revolutions' for the realisation of a just society.

Commenting on his ex-student, he stated, ''What is clear is that Gani Fawehinmi was dedicated to Nigeria's underprivileged groups who are the vast majority reduced to nothingness by a class of vultures. He was dedicated to justice, probity, and what he saw as the truth. There is absolutely no doubt that he also had immense courage…Gani called himself a socialist. I do not know what to make of that but I must say that the socialists are the most consistent and dedicated champions of the common people''.

The Ondo State Government also lived up to its promise to build and name a state-of-the-art Diagnostic Centre after him. A statement by the Chief Press Secretary to Governor Olusegun Mimiko, Mr. Kolawole Olabisi last week, stated that the centre was tailored at helping in the early detection and treatment of diseases such as cancer which reportedly killed the illustrious son of the state.

Indeed, Gani Fawehinmi's demise had foreclosed his physical presence in confronting the country's marauders and spoilers of its ethos. But even in death, it is glaring that what he lived for continue to enchant and haunt them.