Dangote secures $2b from Chinese bank for 2 cement plants 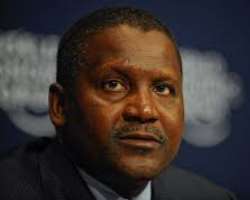 Dangote Group, owned by Africa's richest man, Aliko Dangote, has signed a deal for a $2 billion loan from the Industrial Commercial Bank of China Limited for two cement plants.

After securing the deal, Mr Dangote told Reuters that “the interest rate is okay, quite favorable with me”.

“It's for my two cement companies that we are establishing in Nigeria.”

Few days ago, Dangote Group held a ground-breaking ceremony of a cement plant in Okpella in Edo state, south-south Nigeria.

It has an estimated production of six million metric tonnes of cement per annum.

Addressing a gathering at the ground-breaking ceremony, he said the one-billion dollar investment would create massive employment.

Dangote cement group is targeting 81 million tonnes of cement per annum, which will make the group one of the top six cement companies in the world.