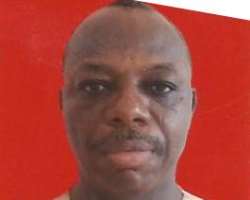 Prince Amobi Alfred Ugochukwu is a notable personality in Imo State. He is a native of Nkwerre Local Government Area of the State. He is presently not happy with how DIAMOND BANK NIGERIA PLC. frustrated him for almost 20 years, killing his once flourishing businessin the process. Hence he has petitioned the Economic and Financial Crimes Commission (EFCC).

As a contractor and Managing Director of Al-CLEMENT ENTERPRISES, an indigenous Company which is involved in contracting services and general merchandise, Prince Ugochukwu entered into contracts with the Imo State Secondary Education Management Board (SEMB) and the Imo State Primary Education Board for the Production of students identity cards on the 10th of March 1997, at a value of over N16 million naira.

In order to ensure smooth and effective execution of the contract, the businessman deployed his two bank accounts with DIAMOND BANK, for the purpose of receiving various sums of money for the project.

However, in the course of executing the ID card contract, the then Branch Manager of the Bank in Owerri, at their No 6 ITEM Street Ikenegbu Layout Office, Reverend Festus Azara allegedly introduced (for official purpose) the then Special Assistant to the Imo State Administrator (Governor), Reverend Ugochukwu Unachukwu to Prince Amobi Ugochukwu.

In his Petition to EFCC, Prnce Amobi Ugochukwu made a damning revelation. Hear him, “DIAMOND BANKcajoled and forced me into making the said Reverend Ugochukwu Unachukwu a co-signatory to my Company’s account, where the money for the execution of the contract was lodged into, with a fictitious name – “Uzoma Onuoha”.When I protested why Reverend Ugochukwu Unachukwu should bear a fictitious name to be a co-signatory in my company’s account, I was told that it was for security reasons and that DIAMOND BANK had been doing so for many officials of State Governments in Nigeria.’’ Unquote.

With the above explanation DIAMOND BANK has indicted itself, as an agent of facilitating fraud in state governments in the country

Prince Amobi Ugochukwu continued in his high powered petition, “When I completely became uncomfortable with Reverend Ugochukwu and his “adopted name, Uzoma Onuoha”, especially when I discovered that the passport photograph in my banks signature Card is not Reverend Ugochukwu Unachukwu but a fictitious photo, I wrote DIAMOND BANK of my decision to withdraw the name of the said “Uzoma Onuoha” as co-signatory. Thereafter, I operated my company’s account without hitches on the 8th of May 1997’’..

The petition which was also copied the Governor of Central Bank (CBN) and the Press showed that subsequent transactions with the said account at DIAMOND BANK were stalled with no justifiable reason. “To my Chagrin, Diamond Bank claimed that they acted on a purported Court Order which placed embargo on my accounts with them. Till date the Bank has failed to produce the so called Court Order restraining me from having access to my accounts. Of course, there was no Court Order”.

Prince Ugochukwu stated. The unprofessional conduct of Diamond Bank pushed the Petitioner to drag the bank to the Law court in 1997. Prince Ugochukwu got judgment in his favour at the High Court. He also got judgment in his favour at the Appeal Court. However, the “Nigeria factor” played major role (according to Prince Ugochukwu) in deciding the Case at the Supreme Court. Prominent Legal experts have stated that the Supreme Court erred by twisting the case in favour of Diamond Bank. The Supreme Court refused to look into the ingredients of the matter, due to perceived influence and interference from certain quarters.

However, Prince Amaobi Ugochukwu is not done yet with the case; hence he is making use of another window of opportunity to get justice through EFCC. Hence he has petitioned them. He is also exposing the fraudulent nature of Diamond Bank for the public to take note. Also, some Human Rights Groups have indicated interest to battle DIAMOND BANK NIGERIA PLC. due to their several alleged fraudulent exploits against Nigerians and othercorporate organizations.