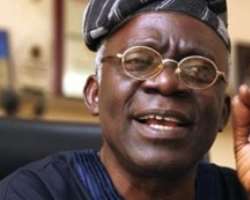 Human rights lawyer and senior advocate of Nigeria, Mr. Femi Falana, has asked the Minister of Finance, Mrs Kemi Adeosun, and the Federal government to shelve the idea of looking for external loan for Nigeria.

He suggested that the Government make efforts to collect the outstanding $200 billion owed the country by the NNPC, oil companies and looters. According to him, in case government is confused about where the huge trove of dollars is being kept, Falana gave a catalogue of the outstanding sums. He did not fail to threaten to file a court action against the Federal Government if it fails to heed his advice.

In his letter to Adeosun, he said, “We are compelled to call on the Federal Government to muster the political will and courage to recover the aforesaid withheld or stolen wealth of not less than $200 billion belonging to the Nigerian people. However, if you refuse to accede to our request we shall have no alternative than to initiate legal proceedings at the Federal High Court with a view to restraining the Federal Government from further plunging the nation into external indebtedness.”

The full text of the letter reads below:
8th April, 2016
The Honourable Minister of Finance,
Federal Ministry of Finance,
Ahmadu Bello Way,
Central Business District,
Abuja, FCT.Dear Honourable Minister,
REQUEST FOR THE COLLECTION OF OUTSTANDING REVENUE OF $200 BILLION WITHHELD FROM THE FEDERATION ACCOUNT OR STOLEN BY LOOTERS

Following a recent report that the Federal Government had concluded arrangements take a loan of $2.5 billion from the World Bank and $1 billion the African Development Bank we wrote to the Administration requested to jettison the plan. In our letter dated February 12, 2016 addressed to your good self we urged the Federal Government to explore alternative sources of raising revenue to fund the 2016 budget instead of increasing the nation's external debt of $64 billion. In particular, we requested the federal government to embark on the recovery of the revenue of $42 billion withheld from the Federation Account from 1999-2012 by some transnational oil companies, the Nigerian National Petroleum Corporation and other agencies of the federal government.

(a) The National Extractive Industries Transparency Initiative has confirmed that from five cycles of independent audit reports of NEITI covering 1999-2012 the Nigerian National Petroleum Corporation (NNPC), some oil companies and certain agencies of the federal government had withheld $20.2 billion for the Federation Account. The indicted oil companies and agencies should be made to remit the said sum of $20.2 billion into the Federation Account.

(b) In 2006, the Central Bank of Nigeria apportioned $7 billion out of the nation's external reserves to 14 Nigerian banks. In 2008, the CBN also gave a bailout of N600 billion ($4 billion) to the banks. The indebted banks should be asked to repay the $11 billion loan.

(c) On September 6, 2016 the Nigerian National Petroleum Corporation (NNPC) announced that arrangements had been concluded to recover the sum of $9.6 billion in over-deducted tax benefits from joint venture partners on major capital projects and oil swap contracts. Since the NNPC is said to have recovered the said sum of $9.6 billion it should be remitted into the Federation Account.

(d) Sometime in 2009, Mobil Producing Nigeria Unlimited applied to the federal government for the renewal of three oil blocks. Upon granting the application the NNPC asked Mobil to pay the sum of $2.5 billion for the renewal of the licences. Curiously, the $600 million paid by the Mobil was accepted by the federal government. One of our clients has requested the EFCC to investigate the circumstances surrounding the fraudulent transaction. The outstanding sum of $1.9 billion ought to be collected from Mobil and paid into the federation account.

(e) From 1998-2014 the Federal Government collected over $4 billion from the over $5 billion stolen from the vaults of the CBN by a former military ruler, the late General Sani Abacha. I have submitted a petition to the Economic and Financial Commission to investigate the alleged criminal diversion of the recovered loot by some former public officers. The governments of the United States and Switzerland have promised to repatriate $458 million and $321 million respectively recovered from the loot.

(f) In 1999, the Abdulsalami Abubakar military junta enacted theDeep Offshore Inland Sharing Contract Decree to give effect to certain fiscal incentives for the oil and gas companies operating in the Deep Offshore and Inland Basin under production sharing contracts. Thus, by virtue of section 5 of the Act, the payment of royalty in respect of the Deep Offshore production sharing contracts shall range from 4 to 12 per cent while no royalty shall be paid whatsoever in areas in excess of 1000 metres depth! Since the 15-year period of for non-payment of royalties expired in June 2014 the should collect arreas of royalties running to hundreds of million of dollars owed by the oil and gas companies operating in the area.

(g) The $470 million contract awarded to ZTE, (a Chinese company) in 2009 by the federal government for the construction of CCTV cameras in Abuja and Lagos has been abandoned. Hence, the cameras which were installed did not capture the criminals who recently launched bomb attacks in Abuja and killed scores of citizens. Since the contract was not executed the federal government should recover the contract sum of $470 million.

(h) In the Appropriation Act, 2011 the sum of N245 billion was earmarked for fuel subsidy. In violation of the budget law the federal government fraudulently paid out N2.5 trillion ($16 billion) to a cabal of fuel importers. The investigation conducted into the large scale fraud by the Police and the anti graft agencies was compromised due to pressure from the Jonathan administration. The EFCC should revisit the matter.

(j) For contravention of the law on compulsory registration of all SIM cards the NCC imposed a fine of $5.2 billion on MTN last year. Based on plea by the MTN management and the intervention of the Government of South Africa the fine was reduced to $3.9 billion out of which MTN has paid the paltry sum of $250 million. Since MTN has withdrawn the suit challenging the payment of the fine the federal government should take steps to ensure the prompt payment of the outstanding balance of $3.65 billion.

(k) Under the Jonathan administration it was estimated that the nation was recording oil theft worth $7 billion to criminals annually. An investigation being carried out by a team of lawyers hired by the federal government has so far confirmed that hundreds of millions of barrels of oil were stolen by oil companies and shipped to many countries. According to the lawyers the total amount recoverable by the Nigeria Government from the Sellers and Buyers who stole Nigeria's hydrocarbons and shipped same to the United States from January 2011 to December 2014 stands at US$12.7 billion. Since the verification is programmed to cover 10 years it is estimated that Nigeria can recover not less that $100 billion from the undeclared millions of barrels of oil shipped to the United States and other countries. The EFCC should collaborate with the lawyers to recover the missing fund and prosecute the transnational oil companies involved in the grand oil theft.

(l) On February 20, 2014, President Goodluck Jonathan fired the then Central Bank Governor, Alhaji Sanusi Lamido Sanusi for having the temerity to expose the NNPC for not remitting $20 billion to the Federation Account. Following the reconciliation of the accounts of the NNPC by the federal government the missing sum was said to be $10.8 billion. To douse the tension generated by the scandal the Federal Government appointed a firm of auditors to audit the books of the NNPC. But in a bid to cover up the scandal the Federal Government ensured that the auditors were denied access to vital documents. At the end of the investigation the auditors indicted the NNPC for withholding $1.8 billion from the Federation Account.

(m) Rising from its monthly meeting at Abuja on September 17, 2015 the National Economic Council accused the Nigerian National Petroleum Corporation (NNPC) of failing to remit N3.8 trillion to the Federation Account under the Jonathan administration. The Council set up a committee of 3 state governors to trace the missing fund. Last month, the Auditor-General of the Federation indicted the NNPC for withholding N3.2 trillion from the Federation Account in 2014. The Revenue Mobilisation Allocation and Fiscal Commission has said that ” the total indebtedness of the NNPC to the Federation Account is N4.9 trillion ($32.6).” In its reaction to the allegations the NNPC has challenged the figures but admitted that it has withheld the sum of N326 billion! The federal government should investigate the conflicting figures to dtermine the actual amount withheld by the NNPC.

(o) The unprecedented looting of the public treasury via the NNPC took place under the rogue regime of President Goodluck Jonathan has continued unabated under the President Buhari who is currently waging a war against corruption. Last week, a firm of auditors revealed that out of the sum of $6.4 billion realised from the sale of crude oil and gas by the Federal Government in the first quarter of 2016 the NNPC remitted only $2 billion to the Federation Account and withheld the colossal sum of $4.2 billion. Up till now the NNPC has not explained how much of the sum of $4.2 billion was spent on its operations in 3 months.

(p) The presidential panel instituted by President Buhari to investigate the criminal diversion of the fund earmarked for procurement of weapons for the armed forces from 2007-2015 has established that over $8 billion was stolen by handful of serving and retired military officers and their civilian collaborators via the Office of the National Security Adviser and the Nigerian Air Force. The Panel is currently probing similar fraudulent arms procurement in the Nigerian Army and Nigerian Navy. The EFCC has commenced the recovery of the said sum of $8 billion and prosecution of individuals and corporate bodies implicated in the criminal diversion.

(q) The United States' Government has successfully prosecuted Halliburton and its top officials for bribing Nigerian public officers with $180 million and recovered fines of about $1.3 billion. Although no one was prosecuted in Nigeria the federal government about $200 million was paid by Halliburton and other indicted companies through plea bargain.

(r) The sale of the OPM 245 for $1.3 billion otherwise known as Malabo oil deal has continued to generate controversy. Allegations of bribery and money laundering are being investigated by the British Police, the Italian Police and the EFCC. Apart from the $210 million signature bonus paid to the federal government the sum of $190 million has been frozen in the United Kingdom and Switzerland. The Italian Police has also frozen $200 million from the proceed of the transaction. The federal government ought to take a final decision on the matter so as to end the controversy surrounding the sale of the oil block.

In the light of the foregoing, we are compelled to call on the Federal Government to muster the political will and courage to recover the aforesaid withheld or stolen wealth of not less than $200 billion belonging to the Nigerian people. However, if you refuse to accede to our request we shall have no alternative than to initiate legal proceedings at the Federal High Court with a view to restraining the Federal Government from plunging the nation into debts.