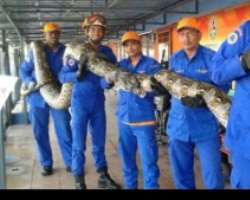 Members of Malaysia's civil defence force pose with a python, that they estimated to be 7.5m long and 250kg in weight, caught near a construction site in Paya Terubong (Reuters)

A giant python weighing 250 kg found on a Malaysian building site may be the longest ever caught, an official said today.

The estimated eight-metre long snake was spotted on Thursday under a fallen tree on the island of Penang.

Medusa, a reticulated python weighing 158kg (24st 12lb), is kept at a haunted house in Kansas City in the US state of Missouri.

The Malaysian snake, also thought to be a reticulated python, has not been officially measured by record keepers.

Herisyan said it weighed 250kg and took 30 minutes to rescue, the BBC reported.

It was due to be transferred to the government’s Department of Wildlife before it died.