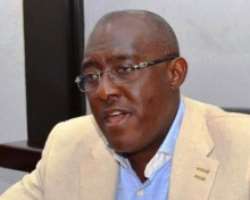 The National Publicity Secretary of the Peoples Democratic Party (PDP), Olisa Metuh, on Monday  opened his defence before an Abuja Federal High Court.

Metuh is facing trial  for money laundering and charges bordering on the N400m he received from the Office of the National Security Adviser.

Metuh's first witness is a former managing director of the New Telegraph and a member of the PDP publicity consultants, Ike Abonyi.

According to Abonyi, in  his testimony before the court,  the N400m was released to the PDP spokesperson by the ONSA in 2014 was on the instruction of the then President, Dr. Goodluck JonathanA for the 2015 presidential election.

Led in evidence by the lead prosecuting counsel, Onyeachi Ikpeazu, the journlist who was also a former media adviser to Dr. Okwesilisi Nwodo, a former chairman of PDP told the court how former President Jonathan had requested for the corporate account of the PDP spokesperson after a presentation made to him on a planned image laundering campaign preparatory to the 2015 election.

The presentation, according to him was presented by a team led by Yomi Badejo (Okusanya), the Managing Director of CMC Connect, a public relations firm based in Lagos sometimes between October and November 2014.

Abonyi who said he started working as a consultant to Metuh when he was appointed the National Publicity Secretary of PDP told the court that Dr. Nwodo had engaged CMC Connect to help to package programmes aimed at improving the image of the party when he was working with him. He added that since  Metuh was also part of Dr. Nwodo team, he also came in contact with CMC Connect then.

Abonyi said: “Soon after his election as National Publicity Secretary, he called me to arrange for CMC Connect to meet with him. This I did and the MD of CMC Connect, Mr Yomi Badejo came with his team who met with Chief Metuh and some officials of Publicity Directorate of the party.

“Metuh appealed to the consulting firm that he want them to return and continue where they stopped when Dr Nwodo was there. The Consulting Firm said they were willing to return, but the party is owing them.

“Chief Metuh promised to make a case for them at the NWC of the party. Following their presentation at that meeting, Metuh said he will need them, but at that time there was no resources to engage them.

“He promised to get back to them if he got some resources from the party.

“Eventually, towards the end of 2014, Chief Metuh approached me where I was DMD of Telegraph newspaper and requested that he will need my full services at this time.

“That was the point I left New Telegraph to join him. When I joined him, he told me that CMC Connect will be handy, so he wanted us to call back CMC Connect and I told him that CMC Connect is too expensive, that we could use smaller PR firm, but he insisted on CMC Connect, saying that the assignment was enormous and he will  be ready go for the best.

“When I mentioned the fear of funding, he reminded me that the general elections was coming and lack of funds in his department will soon be a thing of the past because the party and the leader of the party who is the president of Nigeria then will have no choice but to fund the department.

“The main consideration for giving the job to CMC Connect is the quality of their work. In addition, the party was owing CMC Connect and Metuh has promised to help them and made commitments to them that whenever funding comes, they will be number one to benefit.

“Even when I tried to talk Metuh out of CMC Connect, he reminded me that he has made a commitment and will not like to go out of it. So, we eventually called up CMC Connect to join a team of other journalists, media practitioners and some politicians when Metuh told us he has been given an assignment by the leader of the party, President Jonathan to come up with strategies that will help the party win the then forthcoming general elections.

Chief Metuh told us that the assignment given to him was also given to some other professionals, that we should see it as a challenge and make sure that our own strategy will prevail in the choice that the party leaders and the President would make eventually.

The team anchored by CMC Connect devised some strategies and after rehersals and testings with Chief Metuh presiding in most of the meetings, we all agree that we have a good product to present.

And Chief Metuh said we should wait for clearance from the presidential villa for a date for the presentation. Then, one afternoon, he came to me and said he has just received a call from the National Chairman of the party, Alhaji Adamu Muazu that the President will be ready for the presentation that night.

“All the other members of the team were resident in Abuja except CMC Connect who was based in Lagos. We called the Managing Director, Mr Yomi Badejo to take the next available flight to Abuja for the presentation. Because he was already expecting the appointment for the presentation, he took the next available flight and arrived Abuja about 6.30 pm.

Because he was coming in from Lagos, other members of the team went on one vehicle while Chief Metuh carried the Managing Director of the Consulting firm. I was part of the team that was in the other vehicle.

“And when we arrived at the presidential villa, only Chief Metuh's car was allowed to enter. But he and Metuh waited for us at the security clearance area. After the clearance, we were ushered in by the security to a waiting room.

“At the time we entered the room, Doyin Okupe was speaking. After that the President said, where are your men and he called us up. And the MD of CMC Connect was the first to speak in our team.

He went in with a projector and demonstrated most of the strategies we had in mind.

“After the presentation, the President requested for comments from other members of the team and after our comment, he said jokingly that we are too hard on him because virtually all who spoke from our team made it clear to him that his image was in a bad shape and he himself is not helping matters the way he is acting.

“At a point, Reuben Abati, the media adviser who saw our presentation as an indictment on him told the President that the situation was not as bad as we tried to portray, but the President overruled him.

“After the presentation, the President asked for comments from those sitting with him and most of the speakers made positive remarks that they were impressed with what they saw in our presentation.

“The office of the Media Adviser did its own presentation to  the President, Dr Doyin Okupe and some other professionals brought in by some party and government officials also did presentation.

“Following the comments of the people sitting with the President, I recalled vividly the comment of the former governor of Anambra State, Peter Obi who told the President that what these people presented if they can put it into action, they should be quickly mobilised because if not before the President start campaign, it will be difficult to win the election given the image of the government  at that time.

“The president then said since it appears to be the consensus of his people that Metuh and his team did a better job, he will advise that all other teams collapse into Metuh's group because he will want the Consultant to provide direction.

“At that point, the President told Chief Metuh, 'You have done a good job, but the real job out there is to put all these into action.' And he told him to bring a corporate account to him for immediate mobilisation and action.

“After the presentation, we continued our work and the MD of CMC Connect returned to Lagos and we were waiting to hear from Chief Metuh on the outcome of the presentation.

“And one afternoon, he told us that the work will now start, that the President called him and said he should check his bank, that the money has been disbursed for the job. Since the election, I have been consulting for PDP Publicity Secretary,” said Abonyi.

When he was asked by the defence counsel how the activities of PDP National Publicity office is funded, Abonyi said: “To the extent that I operated as a media adviser to the National Chairman and as a political journalist familiar with political activities. I am aware that the funding of the office of Publicity Secreatry comes mainly from the party and the leader of the party who is President Jonathan.”

During cross-examination by the lead prosecuting counsel, Mr. Sylvanus Tahir, the witness said the ONSA was not part of the organogram of the PDP.

After the witness was cross-examined by the prosecuting counsel, Justice Abang adjourned till April 20, to enable the counsel for Metuh's firm, Tochukwu Onwugbufor (SAN) to cross-examine him (the witness).