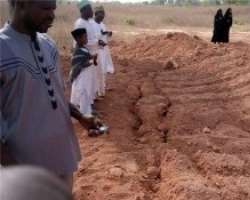 The Kaduna State Government on Monday has affirmed that  347 corpses were given a mass burial at the Mando cemetery after a clash between soldiers and members of the Shiite's sect in Kaduna last year.

The Secretary to the Kaduna State Government, Mallam  Balarabe Lawal,  said the corpses were given a mass burial in a grave on  December 14, 2015 in a cemetery along Mando/ Zaria Road.

Lawal made the disclosure  in a government submission at the ongoing public hearing of the Judicial Commission of Inquiry into the clash. Lawal, who led six government witnesses before the panel, said that 191 corpses were taken from the Nigerian Army Depot, Zaria, and were buried in Mando area in Kaduna.

He said 156 corpses were also conveyed from Ahmadu Bello University Teaching Hospital, ABUTH, Zaria, to the same Mando area. The state government said the corpses were committed into a mass grave at the Mando area jointly supervised by the state government officials and about 40 men of the Nigerian Army, led by an officer with the rank of a Major. The SSG said 189 suspects were being prosecuted for alleged involvement in the Zaria crisis while one suspect had died in custody. He said the state government had received several security reports from the Directorate of State Service, DSS, on the activities of the movement.

Lawal further said that several measures had been taken to address the situation before it finally escalated into the clash with the Nigerian Army.

Musa said he supervised  the burial and that the corpses were buried  between 12 midnight and 5am.

According to Musa, “On December 13, 2015, I received a phone call from the SSG to come to the Government House after which I was directed to go to Zaria to find out the number of corpses and how they would be buried.

“I moved in company of the state Commissioner of Police straight to ABUTH, Zaria to ascertain the number of corpses. There we counted 156 corpses.

“At the Nigerian Depot, the SSG directed me to meet with one  Maj. Ogundare regarding the corpses there. After introducing myself, he refused to let me know the number; but later on, the SSG called me and told me the number.

“He also confirmed the number while they were being buried; as he counted them one after the other as they were laid in one grave.

“We left the Nigerian Army Depot with three heavy-duty trucks and 60 young officers who escorted us to assist in offloading the corpses. From ABUTH, Zaria, five small trucks carried the 196 corpses. Most corpses were covered with black materials and they included women and children.”

“The mass burial,”Musa said,  “was authorised through a warrant of burial obtained from a Kaduna Chief Magistrate's Court in Kaduna,” he said.

The SSG also explained why the state government demolished the Gyelasu resident of the Shiite leader, the  Hussainiyya Centre, Dembo centre, Jushi and two other buildings belonging to Alhaji Aminu Idris and Alhaji Tijjani Mohammed.

Lawal said they were pulled down because they did not meet the safety standards set by the state government.

He  further said that a report from a team of engineers who carried out inspection on the houses said the buildings were failed structures.

“So, they were demolished in the interest of safety,” he said.

The state government blamed some of the lapses and the excesses of the movement on the laxity of the previous government which did not take serious action to curtail the activities of the sect. On alleged demolition of buildings and structures of the IMN leader, the witnesses said that the demolitions were based on recommendations of a committee set up by the state government. The witnesses, including officials of KASUPDA, KAPWA and the state ministry of Works, Transport and Housing, told the panel that several other structures belonging to individuals had been demolished due to poor building specifications and standards. Mrs. Saratu Haruna, General Manager, KASUPDA; Mr. Namadi Musa, D-G Interfaith Agency; and Prof. Adamu Ahmed, Deputy CMD, ABUTH, appeared before the panel.