Mother of five found dead in hotel, lover nowhere to be seen 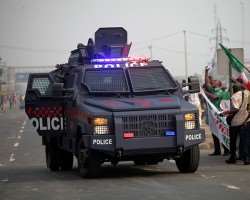 Policemen attached to the Apapa Police Station have launched investigation into the death of a mother of five in a hotel in Apapa area of Lagos State.

It was also gathered that the police are hunting for her lover after the man disappeared into thin air.

The corpse of the woman was found alone in the hotel.

The deceased, simply identified as Mama Joy, was from Benue State, but married to an Igbo man.

The incident, which happened on Friday afternoon, threw the hotel into a panic.

According to the police, the deceased checked into Double F Hotel, Randle Road, Apapa with her partner.

After hours of waiting for the lovers to come out from the hotel room, the staff took turn knocking.

When there was no reply, they broke down the door. The woman's corpse was sighted, but her lover had disappeared.

Mama Joy is a businesswoman, who operated a restaurant close to Police Dog Section in Apapa.

Policemen from Apapa Police Station visited the scene and moved the corpse.

A police source said: “The hotel staff had waited for the lovers in the room to check out after their time had expired but to no avail.

“After repeatedly knocking at the door without receiving an answer, the staff forced the door open.

“The hotel workers were shocked to see dead woman alone in the hotel room.”

The Police invited hotel workers who were on duty to come to the station to make statement.

One of the police sergeants at the station said there was no visible injury on the corpse.