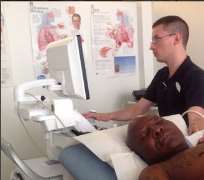 Singer and Social crusader, Charles Oputa better known as Charly Boy, recently revealed that he finds it difficult to take drugs when he is down but some of his fans wondered how he has been able to stay fit and healthy.

Though he might have difficulty is wallowing drugs but he might actually be in love with injections though.

The singer was recently in a hospital where he had gone for a medical checkup and now his source of looking healthy and younger than his age has now been known.