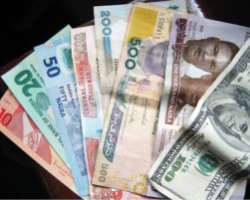 The Lagos Chamber of Commerce and Industry (LCCI) has urged the Federal Government to implement a flexible exchange rate regime to manage the country's weak currency to stimulate investment.

Its President, Chief Nike Akande, stated this during the chamber's media conference in Lagos.

She noted that a flexible exchange rate regime is adopted to cope with changing demand and supply conditions in the forex market.

She said the economy is not as developed as others and should adopt policies that will be in the best interest of the people.

She said: 'The average naira exchange rate remained stable at the inter-bank segment of the foreign exchange market with a daily average of N196.99/$ between January 25 and March 14, 2016. So far, the value of the naira has depreciated by 17.2 per cent at the CBN window from N165 to the dollar (which it was at the end of December 2014), to the current rate of N196.9. However, the parallel market is still under pressure for the last couple of months even as the depreciation remains huge with the value of naira weakening by almost 100 per cent at an average of N320 to a dollar to date.'

She added that the recent sharp depreciation of the naira exchange rate in the parallel market is worrisome, stressing that it is a trend that should not be allowed to continue and that  necessary steps should be taken to stem the slide and volatility as it is as much of an issue to consumers as it is to producers stakeholders that create value in the economy.

She said: 'The discussion at this time should not be about devaluation of the naira. It should be about a pricing mechanism that is sustainable, predictable and transparent. It is about a policy regime that would reduce uncertainty and inspire the confidence of investors.  It is about a policy framework that would minimise discretion and arbitrage in the foreign exchange allocation mechanism.  This is what the discussion should be about.''

She said the benefits of this approach are that it enhances liquidity in the foreign exchange market, it reduces uncertainty in the foreign exchange market and therefore enhances the confidence of investors, it is more transparent as a mechanism for forex allocation, it minimises discretion in the allocation of forex and it reduces opportunities for round tripping and other sharp practices.

She continued: 'The  framework adopted by the CBN is a fixed exchange rate regime.  This model is better suited for a country that has adequate reserves to support the fixed rate. But in our case, we do not have the reserves to support the exchange rate at N197 to a dollar. This is the fundamental issue at this time. The consequences are already manifesting in the following ways; widening gap between the official and parallel market exchange rates to an unprecedented level of over 60 per cent, lack of liquidity in the foreign exchange market resulting in acute scarcity, mounting trade debts, increasing factory closures as many manufacturers are not able to access foreign exchange for raw materials and other input, many investors are not able to meet offshore obligations, mounting inflationary pressures, and sharp drop in capital inflows.''

She added: 'In the light of the foregoing, we recommend the following policy options to mitigate the current crisis; adoption of a flexible exchange rate regime, this would improve liquidity in the forex market, reduce uncertainty and enhance investors' confidence.

'Flexible exchange rate deepens the autonomous foreign exchange market through the liberalisation of inflows from export proceeds, Diaspora remittances, multinational companies, donor agencies and others.  Market rates should be allowed to prevail in the autonomous window.' The Nation