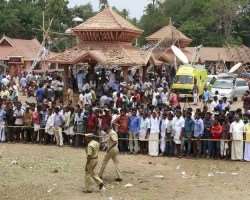 A massive fireworks display, part of the concluding day of the annual festival at a Kali temple in Paravur, rocketed out of control at 3.30am on Sunday, killing 112 people and incinerating and wounding nearly 400 others, turning a half-km blast radius from the epicentre into scorched earth.

Late on Sunday, police detained five people and filed cases against Varkala Krishnankutty and Kazhakoottam Surendran, the contractors entrusted with the fireworks by the temple authorities. Krishnankutty is absconding while Surendran was critically injured in the blaze.

There were around 15,000 people in the temple maidan and surroundings at the time of the incident, and temple authorities were prima facie guilty of violating the district administration’s order against holding a fireworks show. It also violated the Supreme Court’s directive that fireworks must not be used beyond 10pm.

Such was the impact of the blast that the glass facade of a showroom in the centre of Kollam town 2km away was shattered and a two-storey building in the vicinity caved in. We were threatened, says family that complained against fireworks at Kollam temple

Rescue efforts began while it was still dark with police and fire engines having to negotiate burning rubble. With daybreak, rescuers had to contend with the sight of bodies charred beyond recognition and body parts littered on tree branches and under concrete slabs: if there was hell on earth, it was here.

“It wasn’t the fire alone that scorched people but the way they were hit by broken concrete that flew like projectiles. People close to the fireworks display were flattened by heavy stones and concrete,” said Biju G, who was present at the temple at the time of the explosions.

The fireworks display, involving an estimated 50 tonnes of gunpowder and as sorted explosives such as potassium chloride and ammonium nitrate, began at midnight and was at its fag end when sparks from a rocket that exploded 50 feet above the ground in the shape of a sunflower fell on an auto packed with explosives and on an adjacent storeroom where more explosives were stacked, leading to the inferno. Apparently, permission for the show is sought and refused every year, and the rule is violated with impunity. The Kollam temple tragedy had its genesis in a fireworks competition between two rival pyrotechnicians organised by the temple authorities. A four hour display was accompanied by `live commentary’ on the proceedings and reportedly involved prize money and betting. Police remain wary of intervening, fearing religious sentiments and unsure if the politicians will back them if they act against this 50-year-old practice.

In the last three years alone, 451 people have died in Kerala in accidents related to fireworks. Though there are stringent provisions on paper, in practice these are observed in their breach.

“We will investigate how the orders were flouted and who was responsible for the decision to go ahead with the fireworks display,” said CM Oommen Chandy.

The state and central governments acted swiftly to enable optimum rescue effort. PM Narendra Modi flew down to Kollam and visited the temple premises. He also visited survivors at the district hospital in Kollam and at the Govt Medical College in Thiruvananthapuram. “It was a shocking and horrific accident. In the explosion, heads got severed from bodies. We will ensure all support. We stand with the people of Kerala and will extend all possible help,” Modi said. A team of expert doctors accompanied the PM and are staying back here to offer advanced treatment to patients with serious burn injuries. Modi directed Union health minister J P Nadda who reached Kollam to stay back and coordinate rescue operations.

The Kerala government has ordered a judicial inquiry into Sunday’s tragedy. After a special cabinet meet in Kollam, CM Oommen Chandy said the panel would be asked to submit a report within six months. Retired HC judge Justice N Krishnan Nair has been appointed as the one-man commission. Additional chief secretary (home) Nalini Netto has been asked to frame the terms of reference for the judicial probe.

1,000kg of explosives seized from supplier

Police on Sunday seized explosives from the Kazhakootam residence and Attingal warehouse of Surendran, who had supplied the fireworks to the temple. Seven sacks of olapadakkams (crackers made of dry palm leaf), a sack of gundu (low intensity bombs) were seized from the residence and around 1,000kg of explosives (gunpowder, crackers, wicks and chemicals) from the warehouse.