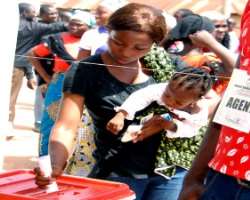 Mr Musa Dikko, the All Progressives Congress (APC) chairmanship candidate for Bwari Area Council in Saturday's council elections in the Federal Capital Territory, has been declared winner of contest. Mr Abubakar Abba, Independent National Electoral Commission (INEC) Returning Officer for the election in the council area, who announced the result in Bwari on Sunday, said that Dikko polled 18,066 votes to win the election.

According to him, Dikko defeated his closest opponent of the Peoples Democratic Party (PDP), Andrew Gwani, who scored 13,279 votes. Other contestants in the election in which 32,662 voters participated, Abba announced, included Mr Wada Abdu of Action Alliance and Kenneth Olabaniji of Citizens Popular Party (CPP), who garnered 93 votes and 72 votes, respectively. He said that the area council had a total of 162,786 registered voters, but that only 33,162 voters were accredited for the election. The News Agency of Nigeria (NAN) reports that collation of the results started at 12.15 a.m. and ended at 8.36 a.m. on Sunday.