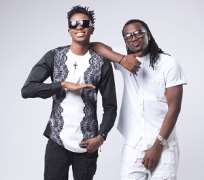 Recently , Psquare brothers, Peter and Paul Okoye settled their difference and most fans are still wondering if Peter would ever be the old Peter they knew in the group. In the heat of the Psquare breakup, Paul quickly introduced the first artist on his Rudeboy Recordz as Muno, who is rumoured to be a replacement for Peter.

However, Muno has made it know that Peter remains an integral part of P-Square “For crying out loud, Peter and Paul are not just brothers –they are twins, so it is reasonably impossible to come in-between them. Twin brothers may quarrel, but the special bond between them cannot be underestimated. Blood is thicker than water.

“They have both inspired me in many ways, and I respect them a lot. I actually count myself really lucky for the privilege of working closely with the most successful twin brothers in Africa, and maybe in the world,”