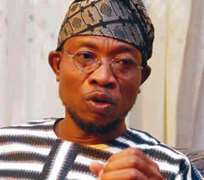 The Governor of Osun, Ogbeni Rauf Aregbesola Thursday evening inaugurated three different committees saddled with the task of proper take off of the newly created councils in the state.

At the ceremony, he described human beings as the basic instrument of development, considering humans’ ability to think, conceive ideas and the engagement in economic production.

The Committees were Asset and Liability Sharing, Boundary Adjustment and Take-Off for Local Governments and the newly created Local Council Development Areas, Area Offices and Administrative Offices in the state.

‎
Justice Kudirat Akano is to chair a seven-man committee on Asset and Liability Sharing, while Justice Akinwale Oladimeji will head that of Boundary Adjustment Committee while former Executive Secretary of Ilesa East Local Government, Mr. Lanre Balogun, will head that of Take-Off Committee.

Aregbesola implored all Osun citizens and residents to strive more for development of the state, saying whatever asset any of the local government has should be seen as starting point for development.

‎
He held that the goal of all should be how to use what the state has to kick-start development and make life better for the people, instead of fighting bitter war over assets that will fuel another round of bitter feuding between communities.

Governor Aregbesola enjoined the Committee on Asset and Liability Sharing as well as the one on Boundary Adjustment to be fair and just and avoid any form of partisanship, bias and favouritism, adding that they should carry out their assignment with the fear of God and follow laid down procedures, rules and regulations.

‎
He held that modern boundaries are for the purposes of taxation, development and election, stating that a local government therefore means the geographical area within which taxes will be collected by a local authority and where that authority is politically responsible and accountable.

According to him, "Assets sharing is like an inheritance in which everyone wants the best portion for himself or herself. Where there is a will, it is easier, and contestations are often without rancour, although wills also are often contested. Where the deceased died intestate without a will anything can happen.

"It is not less so with government assets. Oyo and Osun, those who could remember, fought bitter asset sharing war at the creation of Osun in 1991, which still reverberates till today. This is unsavoury and clearly avoidable for the same people who have the same history, culture and have lived together since time immemorial.

"The greatest asset really is human beings. They are the basic instrument of development. It is humans that think, conceive of ideas, create and engage in economic production. This is why at any time, we should strive more for human development".

The Governor stressed that his goal is the development of Osun with the revenue it's able to generate and the councils are at the centre of such development.

He added that the era of free and unearned money is gone, noting that leadership is now a huge responsibility and no longer a reward or compensation.

He said, "We are in a new era of compulsory wealth creation. Be assured that anyone coming into any elective or appointive position in our state is coming to work, real hard work.”

Aregbesola said Osun is not alone in the financial challenge as being made up by the opposition adding, "President Muhammadu Buhari gave us a breather from our traducers when he announced that 27 states are in similar financial position to ours. It is not that we are proud of this, but to let you know why we are taking the steps we are taking now and what to expect from whoever comes into any position of authority in this state.”

He said further, "We are putting in place a system of revenue generation that works from bottom-up. This is why the local government system is very important to this". The Governor emphasised.

‎
In his remarks on behalf of the three committees, the Chairman of Boundary Adjustment Committee, Justice Akinwale Oladimeji, said the committees would execute their given assignments with high sense of nationalism and patriotism.

Justice Oladimeji said the committees would not allow themselves to be influenced in any manner while carrying out their tasks.

He stated that all members of the committees are men of honour and proven integrity and as such none will compromise their integrity in the discharge of their responsibilities.

"We pledge and promise to perform to the best of our ability. We will do the job you gave us with the best of nationalism and patriotism.

"We assure you, Mr. Governor, that we are not going to be influenced in any form or by any extraneous or political factors.

"We are men and women of integrity and we have been known never to compromise our integrity.

‎
"At the end of the exercise, Mr. Governor will see the confidence he reposed in us," Justice Akinwale said.