Davido In Trouble For Wearing a Flag That Supports Slavery 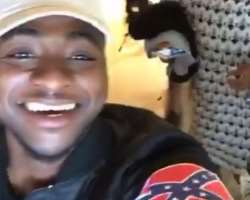 Someone needed to enlighten Davido what the confederate flag means. He got himself in trouble for wearing a jacket emblazoned with this controversial flag. The singer may not be aware that Dylan Roof, the shooter who killed nine black people at a church in America had flew that flag before committing massacre.

It is a common knowledge that the confederate flag is a racist flag that supports slavery. To compound his woes, he was smiling while posing with the cloth. An angry fan wrote “ You need to know what the confederate flag stands for as a black man since you are floating it on your sleeve and screaming nigger. Do your research or stick to Nigerian made shirts that yu would probably understand”

Clearly, Davido have no idea of what the flag means a fan said “ You are a muppet. It is a sign of slavery.”

In an unrelated news, Davido has shown his support for Wizkid who is having a rift with Linda Ikeji. However, Davido has not had an open confrontation with the blogger before and he was smart not to call names.