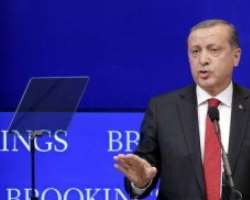 Turkish President Tayyip Erdogan accused U.S. counterpart Barack Obama of going behind his back for criticizing Turkey’s press freedom record and linked it to efforts to “divide” Turkey, media reports said on Sunday.

Obama said on Friday after meeting Erdogan on the sidelines of a nuclear summit in Washington that he was troubled by curbs on the press in Turkey and said he had urged Erdogan not to repress democratic debate in his country.

Turkey has drawn international condemnation for charging two journalists with treason for publishing footage that purportedly showed the intelligence agency shipping truckloads of weapons to opposition fighters in Syria in early 2014. Can Dundar and Erdem Gul of Cumhuriyet face life in prison.

“I was saddened to hear that statement made behind my back. During my talk with Obama, those issues did not come up,” Erdogan told reporters, according to Hurriyet daily. He returned to Turkey after a five-day trip to Washington on Sunday.

Turkey has seized control of opposition newspapers and TV channels and cut the satellite feed of a pro-Kurdish channel, accusing them of terrorism-related activities. Erdogan has personally brought more than 1,800 criminal suits against individuals, including journalists and children, for insulting him since becoming president in 2014.

The Committee to Protect Journalists said at least 13 journalists are in jail for their coverage and described a “massive crackdown” that includes self-censorship and harassment of media-business owners.

‘MASTERMIND’
Criticism of Turkey’s press record seeks to “divide, shatter and if they could, swallow up Turkey,” he said. “This is what I mean by mastermind. A mastermind is playing games over Turkey.

Erdogan and his supporters occasionally refer to a shadowy foreign “mastermind” that seeks to destabilize Turkey, a NATO member that shares borders with Syria, Iraq and Iran.

Separately, Erdogan said the U.S. and Turkey had edged closer in their stances on Syrian Kurds, close U.S. allies in the fight against Islamic State.

Turkey sees the Syrian Kurdish YPG militia and its political arm, the PYD, as part of the outlawed Kurdistan Workers Party (PKK), which has waged a three-decade insurgency against Turkey. U.S. officials have said they distinguish between the groups.

Both Vice President Joseph Biden and Secretary of State John Kerry promised Erdogan during meetings they would not allow the formation of a PYD-run state in Syria, the Turkish leader said.

Turkey is putting forth the names of 2,400 trained Arab and Turkmen fighters to battle Islamic State, Erdogan also said, describing them as part of the moderate opposition. This was “so the U.S. no longer has an excuse” for co-operating with the YPG and PYD, he said.