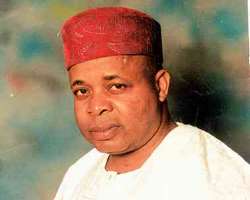 The stoppage of the meeting caused confusion among the NEC and National Working Committee members of the PDP, as governors elected on the party's platform insisted that it (meeting) must hold today.

Nineteen members of the party, including two former Presidents of the Senate – Chief Ken Nnamani and Chief Adolphus Wabara – suspended by the PDP leadership for anti-party activities, had approached the court to stop the meeting.

The plaintiffs, believed to have the sympathy of Acting President Goodluck Jonathan, also secured an interim injunction restraining the party from acting on their suspension until the determination of their suit.

The court also ordered that neither the PDP, its agents, servants, nor the NWC as well as the NEC of the party should act on the case involving the plaintiffs pending the determination of the originating motion on Monday.

The plaintiffs are seeking to nullify their suspension from the party for alleged anti-party activities.

Accordingly, they asked the court for an order restraining the respondents from holding today's NEC meeting.

Further hearing on the matter has been adjourned to May 10.

A bailiff from the court was said to have arrived at the PDP headquarters at about 5pm on Monday to serve the leadership with the court processes, but was stopped by security operatives at the gate.

Reacting to the ruling, the party said it was yet to be served with the court order.

Alkali, who spoke with journalists, said the party would comply with the orders, once served with the processes.

When told that a court bailiff was not allowed into the party's premises, he said he was not in a position to know what happened at the gate.

But rising from their meeting with Jonathan on Monday night, the PDP governors said the court injuction would not stop the NEC meeting from holding.

Jonathan and the governors met for about three hours at the Akinola Aguda House, the Acting President's official residence in the Presidential Villa.

Feelers from the meeting indicated that the governors are considering two options in their bid to go ahead with today's meeting. The options are either to go to court today to seek a vacation of the high court's order or feign ignorance of the development and hold the meeting as scheduled.

Asked if the PDP NEC would still meet, Aliyu said, 'By the grace of God. There are ways by which you can vacate that injunction in the court of law.

'They are saying there will be (a NEC meeting) because there are other ways; when people give an injunction and you go and convince the court that the injunction was sought by the wrong people, then it can be vacated.'

He added, 'We are not aware of that (injunction). To me, I understand that some individuals have done something wrong and there is the need of some measure of discipline (in the party).'

Kwara State Governor Bukola Saraki informed journalists after the meeting with Jonathan that they (governors)had a cordial relationship with the Acting President.

Noting that the meeting was fruitful, Saraki added that both parties were committed to moving the party forward, particularly with the general elections approaching.

He said, 'We were here for over three hours and you can see that we are all feeling very good over the outcome of the meeting.

'We all talked over the issue of the party and how we are going to continue to work together; and also to disabuse the minds of the media and the public that there is any division per se between the governors and the Acting President.

'The governors and the Acting President will also work with the leadership of the party, as we are very close to primaries and elections, to focus and move the party forward.'

When he was reminded that some party members had obtained an injunction stopping the NEC meeting, Saraki retorted, 'Have you checked to find out if they are members of the party?'

Imo State Governor Ikedi Ohakim, in the same vein, said the NEC meeting would go ahead, despite the injunction.

Echoing Saraki, Ohakim asked, 'Are they members of the party?'

The governors later held another meeting at the Kwara State Governor's Lodge in Abuja, which ended at 10.30pm.

Ogbulafor sneaked into the meeting in company with the Deputy National Chairman, Dr. Bello Mohammed.

Asked about his mission, Ogbulafor said he 'came here on a casual visit,' and walked away.

Also, Saraki came out of the meeting venue at 10.40pm, entered his car and left without answering newsmen's questions. He said he had addressed journalists after the meeting with Jonathan.

It was learnt that the meeting, which ended at 10.20pm, was to strategise for today's NEC meeting.

Ogbulafor had early on Monday boasted that he had the support of all the PDP governors and the state chairmen of the party in in his present travail.

He spoke through the deputy national chairman, who received the Forum of Northern PDP State Secretaries when it visited the party's headquarters.

Ogbulafor added that he was pleased that members of the National Assembly and state Houses of Assembly were behind him.

He described the suspended members of the PDP Reform Forum as rebels operating outside the constitution of the party.

Ogbulafor said, 'Those who are working outside the ambit of the party we know are up to no good, they are rebels, they are rather put to cause confusion because of their personal interests.'