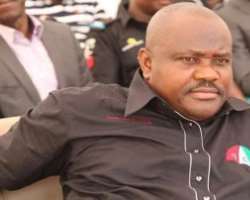 Chairman of the Peoples Democratic Party, Senator Ali Modu Sheriff, has appointed members of  the four special committees in preparation for the party's national convention.

The National Executive Committee of the  party had mandated Sheriff and members of the National Working Committee, at its meeting on March 7, to constitute the committees.

Rivers State Governor Nyesom Wike is to chair the National Convention Committee of the party.

Wike’s resounding victory over the surrogates and federal might marshaled against him by the  loquacious Transportation minister in the recent polls has further elevated his profile among members of the main opposition party.

The party also named memebers of the the Reconciliation Committee, which is chaired by Bayelsa State Governor Seriake Dickson.

Senator Ibrahim Mantu is to serve as deputy chairman.

The National Executive Committee of the  party had mandated Sheriff and members of the National Working Committee, at its meeting on March 7, to constitute the committees.

But reports indicated that  Sheriff and members of the NWC had initiated overtures  on how they would be returned to offices on May 21, the date set aside for the national convention.

It was learnt that it was as a result of the  non-compliance with the NEC directive that had made the Board of Trustees to summon Sheriff to its meeting, which would hold this week.

The Acting Chairman of the board, who is also its Secretary, Senator Walid Jibril, said Sheriff would be expected to brief the board on preparations for the convention.

The naming of these committees is an apparent move  to beat the board's invitation, Sheriff said  in a statement issued by the party's National Publicity Secretary, Chief Olisa Metuh, in Abuja, on Sunday.

Also constituted  is the Finance Committee, which has Gombe State Governor Ibrahim Dankwambo as chairman. Senator Godswill Akpabio will serve as deputy.

It said the committees would be inaugurated by National Chairman Alhaji Modu Sheriff inAbuja.

Stakeholders have been mounting pressure on the leadership to set in motion programmes for the national convention on May 21.