Group Tasks Govt on Compliance To and Ratification of AU Instruments 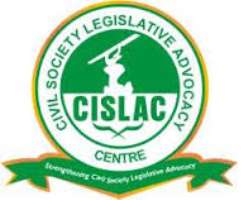 In a bid to strengthen Nigeria's participation in policy formulations, a non governmental organisation, Civil Society Legislative Advocacy Centre (CISLAC) in collaboration with coalition of civil society organisations, the State of the Union (SOTU),has called for compliance, ratification and implementation of ten (10) African Union (AU), instruments chosen by the union.

Speaking at the launch of the 2015 Country Report on Nigeria's Compliance With African Union Standards in Abuja, yesterday, Executive Chairman, CISLAC, Auwal Ibrahim Musa said the work of the group is to engage citizens in understanding the AU instruments and engaging government to uphold the implementation, ratification and domestication of the instruments.

Musa, represented by Senior Programme Officer, CISLAC, Okeke Anya added that SOTU is committed to establishing a democratic culture, effective public institutions and meaningful citizens participation in public affairs to demand delivery of key political, social and economic rise and standards that directly impact on the lives of African citizens.

Delivering a presentation, Lead researcher, Dr. Eddy Akpomera explained that despite the prevalence of these legal instruments and policy frameworks, many key players in government especially those in policy formulation levels are poorly knowledgeable about the provisions of these instruments, and ignore them in proposing policies and implementation of government actions.

He stressed that one of the legal instruments, the African Convention on the Conservation of Nature and Natural Resources (2003) is yet to be ratified by the Federal Government, noting that the policy framework suffered political expediency at the twilight of the past administration of former President Goodluck Jonathan as the Federal Executive Council (FEC) suspended the memo in order to discuss urgent political and electioneering issues, as well as the growing insecurity in the North East.

Akpomera added that Nigeria and other African countries are not doing enough to domesticate and ratify the instruments with the attendant negative implications for socio-economic development of their countries.

According to him; "Nigeria has not ratified the implementation and has also not put up a monitoring mechanism. This does no good for a leading nation in Africa," he said

In her goodwill message, Caroline Waiganjo, SOTU said the report gives information and monitoring of treaties and enlightens citizens about happenings at conferences when African leaders travel on their behalf, stressing that the report is for advocacy and is evidence based.