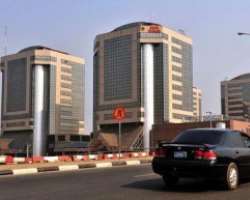 The Nigerian National Petroleum Corporation  has offered to talk to an international watchdog that says it failed to hand over billions of dollars in oil revenues despite government promises to tackle mismanagement and corruption.

But in a report published this week, the Natural Resource Governance Institute (NRGI) said NNPC withheld around two thirds of the $6.3 billion of oil proceeds in the second half of 2015.

NRGI said that was an increase of 12 percent from the proportion kept under the administration led by Buhari’s predecessor, Goodluck Jonathan, in 2013 and 2014.

The NNPC has previously said such accusations failed to account for its costs.

The oil sector in Nigeria, Africa’s top crude producer, accounts for about 70 percent of national income.

The constitution requires NNPC to hand over its oil revenue and money is then paid back based on a budget approved by parliament. But the act establishing the company allows it to cover costs before remitting funds to the government.

On Friday NRGI posted a statement on its website in which it said NNPC had offered to hold talks.

“NNPC has invited NRGI to meetings where NNPC will clarify its position. NRGI appreciates NNPC’s open doors and willingness to engage, and will post further updates based on these discussions,” it said.

NNPC posted the text of the statement on its Twitter feed but a spokesman could not immediately be reached to confirm the details or say when the meetings would take place.

Last month, Nigeria’s auditor-general and the Revenue Mobilization Allocation and Fiscal Commission both said NNPC failed to remit billions of dollars to the public purse during the Jonathan era.

The NRGI report said that until there are agreed rules governing how much money NNPC can keep, and how it must spend the money, it will continue to “leak” out of the system.

“NNPC spending on this scale raises questions about fiscal responsibility, especially at a time when public finances are stretched and the federal government is looking to fund more of its budget with debt,” the report said.

NRGI praised Buhari’s work to reform oil sales, notably efforts to cut out “passive, well-connected middlemen”, and reforms of crude for oil product swap deals that have been replaced with revised agreements directly with oil refineries