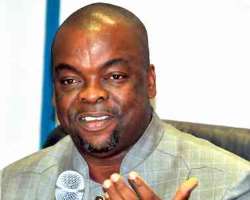 There are strong indications that the Federal Government may announce a new minimum wage for workers in the public sector before May 1, the day set aside by the International Labour Organisation as Workers' Day.

The Minister of Labour and Productivity, Chief Emeka Wogu, and the Joint Public Service Negotiation Council led by Mr. Olakunle Olaitan, continued the negotiations for a payrise on Monday.

Acting President Goodluck Jonathan had ordered that the talks, which first held on April 8 should recommence last Thursday.

At the meeting in Abuja on Monday, Wogu explained that the April 8 talks ended in a deadlock because the Federal Government team had no mandate to agree on the planned payrise.

The minister, who pledged to open discussions with the labour leaders, said that Jonathan was determined to improve the welfare of workers in the country.

Although Wogu did not say when the talks would end, a source close to the meeting told our correspondent that all efforts were geared towards implementing whatever agreement reached by the two teams on May 1.

The minister told the labour delegation that the talks would be accelerated since he had the mandate of the Acting President to negotiate with workers.

He promised to be transparent in his dealings with labour leaders and other nutty issues in the labour sector.

Wogu said, 'The way I intend to work with you, comrades, is by being honest. When there are issues, I shall be open with you about the challenges government is facing with regards to such issues.

'And as partners who have equal stake in the overall progress of this nation, we shall reason together and fashion out mutually benefiting solutions.

'You may recall the reason the negotiation stalled and the reason my ministry had to intervene was because of the alleged absence of a mandate from the government's side.

'I am happy to report to you now that I have made adequate consultations and the Acting President, in line with his concern for workers welfare, has given the mandate to recommence negotiations.'

In his remarks, the President of the Association of Senior Civil Servants of Nigeria, Mr. Olakunle Olaitan, who led the labour delegation in the talks, said that the April 8 talks hit the brickwall because of insincerity on the part of the Federal Government's negotiating team.

He argued that what was required to drive the ongoing negotiation to a successful conclusion was sincerity of purpose.

The labour leader added that it was expected that the negotiations would be concluded by Friday so that the unions could have good news for workers on May Day.

Meanwhile, the process of creating a new salary scale for media and cultural workers in government establishments reached an advanced stage on Monday when the Ministry of Information and Communications received submission from the committee it set up for the purpose.

While receiving the submission, the Minister of Information and Communications, Prof. Dora Akunyili, said since medical doctors and pharmacists have special salary scales, media workers should be treated similarly because of the peculiarity of their work.

According to the proposed scale, the least paid media worker in a Federal Government establishment on level 04 will be paid a minimum of N82, 632.27 per month.

According to him, in fashioning the new salary scale, the committee took into cognisance, the issues of adaptability, sustainability, verification and the state of the economy.

The new salary scale is based on 300 per cent increase in the present basic salary of the workers.

The new scale also proposed an increase in existing allowances. These include housing allowance of 75 per cent; transport 30 per cent; and furniture allowance, 20 per cent.

Jijiwa said the committee also proposed a review every three years and frowned at private sector media organisations that toy with the welfare of their workers.

He said, 'We hope that the golden era in the culture and media sectors will soon be back. We wanted to ensure that our proposal was defendable.

'There is the need to grow the private sector. The private sector should work hard to ensure that salaries are paid as at when due. We should stop the practice of slave labour in the Nigerian media.'

'The unions should not stop the struggle in the public sector media alone. Without human beings, the machines cannot give us good results.'

Responding, Akunyili said it was not a favour to pay journalists well because of the hazards they meet in the discharge their jobs.

She stressed that the killing of The Nation's judiciary correspondent, Edo Sule-Ugbagwu, in Lagos on Saturday was an example of the hazards media men contend with. The minister asked the audience to observe a minute silence in his honour.