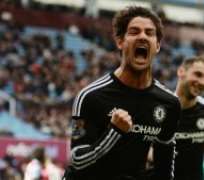 Chelsea manager Guus Hiddink believes there is more to come from Alexandre Pato after the Corinthians loanee enjoyed a goalscoring debut in the 4-0 win over Aston Villa.

Pato made his long-awaited first appearance in a Blues shirt, more than two months after signing for the club, and he marked it with a goal from the penalty spot in first-half injury time, before combining with Oscar to set Pedro up for a second-half brace.

Ruben Loftus-Cheek had earlier scored his first Premier League goal, but Pato and Pedro stole the show from there.

Hiddink praised the Brazilian, saying: “It was not the toughest game in the Premier League but it was good to see [Pato] make his first step.

“The players saw Pato suffering with his fitness when he arrived, and were happy for him to get his goal.

“I think we started very well and killed the game off, defending well, pressing high and trying to get the goals.

“The game was over after the second goal I think.”

Hiddink remains unbeaten in the Premier League since his return to Stamford Bridge, but he insists that blooding young players is more important than continuing that record.

He fielded three 20-year-olds in his starting line-up at Villa Park, and his faith was repaid with a comfortable victory, with Matt Miazga and Kenedy acquitting themselves well alongside Loftus-Cheek.

Hiddink added: “It’s good to see guys like Loftus-Cheek, [Jake] Clarke-Salter and Miazga coming in. We cannot win anything, so it’s a little easier.

“‘I like to bring in youngsters, we have the rest of the season. It’s important they feel the Premier League demands.

“It’s not that important for me [to be unbeaten], and with bringing young kids the risk of failure is a little higher.

“If we play as we did here, pressing high and creating chances, then automatically you get results and could play for Europe.”