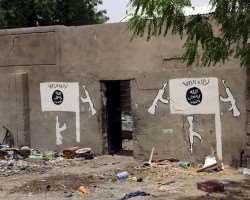 In a very emotional investigative story, HRW reveals how people of Damasak were killed, how others had to flee by water and how the military was less than helpful.

READ full story below:
The Nigerian government should take urgent steps to secure the release of about 400 women and children, including at least 300 elementary school students, abducted by Boko Haram from the town of Damasak in Borno State a year ago. It is unclear whether the Nigerian government has made any serious effort to secure their release.

Damasak is the largest documented school abduction by Boko Haram militants. Yet it has drawn far less public attention than the group's widely condemned abduction of 276 school girls from a government secondary school in Chibok in April 2014. While 57 of those girls managed to escape, 219 remain captive almost two years later.

“Three hundred children have been missing for a year, and yet there has been not a word from the Nigerian government,” said Mausi Segun, Nigeria researcher at Human Rights Watch. “The authorities need to wake up and find out where the Damasak children and other captives are and take urgent steps to free them.”

On November 24, 2014, Boko Haram attacked Damasak, a trading town about 200 kilometers northwest of Maiduguri, near the border with Niger, blocking all four roads leading into the town and trapping residents and traders. The insurgents quickly occupied Zanna Mobarti Primary School, shutting the gates and locking more than 300 students, ages 7 to 17, inside, according to a teacher at the school and other witnesses Human Rights Watch interviewed. The Boko Haram militants then used the school as a military base, bringing scores of other women and children abducted across the town there as captives.

In February 2016, a woman who was at home in Damasak that morning told Human Rights Watch what happened:

It was early morning when I heard gunshots and chaos. My husband had already left home for the market so I grabbed my two children, a boy age four years and a girl age two years, and ran. But we ran into Boko Haram and they detained us in the middle of the town. They brought more and more women and children to where we were kept. Then they took all of us to Zanna Mobarti Primary School…I have not seen my children since then.

The insurgents separated the women from the children and the boys from the girls. Some of the women held captive later told Human Rights Watch they could hear the screams and cries of the children, but they were not permitted to go to them. Over the following weeks and months, the militants forced their captives to learn the Quran. A number of women and children died in captivity after they were fed putrid food, which caused severe vomiting and diarrhea