One year ago, Buhari promised to change Nigeria 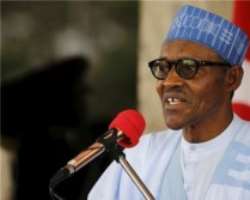 When Nigerians rouse from sleep on April 1, they will again head for filling stations to join the now de rigueur queues for Premium Motor Spirit.

This is no big news; queueing for hours at petrol stations has been the most recurring item on the itinerary of Nigerians not only for the past month, but also for the third spell in the past three months.

What is news is that when these same people woke up exactly one year ago, the majority of them trooped to the streets in jubilation. Three hours and 47 minutes into that day, opposition candidate Muhammadu Buhari was declared president-elect.

But while Nigerians hailed Buhari as a Messiah of sorts, they forgot to remind themselves that no Nigerian leader, democratic or dictatorial, had ever succeeded in delivering socioeconomic prosperity to the masses. Joy so often short-lived

There was something familiar about the sheer joy that was unleashed on the streets of Nigeria on April 1, 2015.

More than five decades ago, on October 1, 1960, when Sir Abubakar Tafawa Balewa accepted the symbols of Independence from the Queen of England and cheerily declared that he was “opening a new chapter in the history of Nigeria”, it was to the delight of millions of citizens.

Elites clutched at their radios as devout Catholics would the Rosary, listening as the sonorous voice of Emmanuel Omatsola blared from Race Course, Lagos: Nigeria is a free, sovereign nation. Pupils holidayed; and when they returned to school, they were served unusual rounds of sumptuous meals and handed lovingly petite green-white-green flags.

But for all of Balewa’s education and popularity in international circles, his reputation for championing northern interests did little to foster unity and stability in Nigeria’s delicate multiethnic set-up. Both power and life were taken away from him in a coup six years later.

When Nigeria returned to democracy in 1999, after decades of torture at the hands of the military, the scenarios were repeated. Olusegun Obasanjo, a retired soldier who was on the throes of death in prison, was suddenly, miraculously handed democratic power.

Obasanjo had admitted that “the entire Nigerian scene is very bleak indeed, so bleak people ask me: where do we begin?” But he also promised to fight corruption, restore public confidence in governance, build infrastructure. Millions of overjoyed Nigerians believed him – the worst civilian government is better than the best military regime was the popular reasoning at the time.

In his book, This House Has Fallen, published a year into Obasanjo’s presidency, British journalist Karl Maier had written: “The government spends up to half its annual budget on salaries of an estimated two million workers… yet the civil service remains paralysed, with connections and corruption still the fastest way to get anything done. Up to 75 percent of the army’s equipment is broken or missing vital spare parts. The Navy’s 52 admirals and commodores outnumber serviceable ships by a ratio of six to one. The Air Force has 10,000 men but fewer than 20 functioning aircraft.”

Sixteen long years later, it is heartbreaking to see that these are still some of the issues dominating Nigerian political discourse.

Caveat: this is not an appraisal of Buhari’s reign – not yet. But some of his first words as president-elect back in 2015 were: “You voted for change and now change has come.”

Goodluck Jonathan’s presidency ended with a biting fuel scarcity that suffering masses felt would accompany Jonathan out of office. On the anniversary of Buhari’s victory, that scarcity they so despised is exactly what they’re grappling with. There are no noticeable improvements in erratic power supply, the unhealthy economy, the dearth of jobs. No “change”, really.

Buhari still has adequate time to turn his fortunes around, but he must be wary of the kind of executive arrogance that undid Jonathan’s party and government.

It is the same type of arrogance that made Minister of State for Petroleum, Ibe Kachikwu, declare in the face of the ongoing petrol scarcity: “One of the trainings I did not receive was that of a magician.” Only to tell prospective protesters days later: “ S ave your fuel, I am not going to resign” is dangerous.

That Femi Adesina, Buhari’s spokesman, told Nigerians a day earlier that: “If some people are crying that they are in darkness, they should go and hold those who vandalise the installations” betrays Buhari’s administration’s intolerance of criticism and suggests possible abdication of leadership.

Just in case Buhari has forgotten, in May, when he will have completed a quarter of his term in office, Nigerians will not only be carefully assessing the state of his “change” agenda, they will also be wondering if his party deserves to be retained in 2019.

This article was contributed to  Al Jazeera.