....As Kenya’s Lorraine Gakuo Gets Evicted
By BHM Group 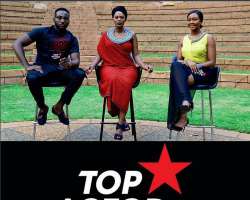 Lagos|Nigeria: Celebrity couple Gbenro and Osas Ajibade made a surprise appearance on BET Top Actor Africa last night, as they flew in from Nigeria to be guest judges as Lorraine Gakuo from Kenya became the latest contestant to be shown the door as the competition for the prize of Top Actor Africa hots up.

The episode featured two of the most tasking challenges so far on this season’s show as contestants were thrown head first into the rural village setting of some of South Africa’s biggest indigenous ethnic groups. They then had the unenviable task of performing iconic Shakespeare monologues to a distracted and often disinterested poolside audience.

Lorraine Gakuo became the fourth contestant to be evicted from the house after Osas, Gbenro and the other judges made their decision following the challenges.

BET Top Actor Africa Season 2 Episode two airs every Tuesday at 6.30pm WAT on BET Channel 129. For all the drama on Top Actor Africa, visit www.betafrica.tv , like us on Facebook at www.facebook.com/BETinAfrica or join the conversation about the channel on Twitter and Instagram @BET_Africa using the hashtag #TopActorAfrica.

ABOUT TOP ACTOR AFRICA
Top Actor Africa, airs every Tuesday on BET (DSTV Channel 129) at 6.30pm WAT. It aims to fast track the careers of actors in a highly competitive industry. The contestants are competing for the grand prize that includes $10,000, international representation and access to Hollywood auditions. Top Actor Africa is hosted by South African film and Television star Zikhona Sodiaka.