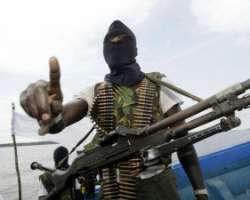 The terminal may not be running until May at least, according to officials cited by RBC Capital Markets.

Although the identity of the assailants remains unknown, security experts suspect that the attack was carried out by militants who deployed deep-water divers, according to the FT .

Notably, this attack is not an isolated incident, reflecting the deteriorating political and security dynamics in Nigeria that pose an immediate threat to its oil output.

“This is part of the significant increase in pipeline attacks following the government’s decision last month to issue arrest warrants for more than a dozen former members of the  Movement for the Emancipation of the Niger Delta (MEND),  including the ex-leader Government Ekpemupolo (aka Tompolo),” wrote Helima Croft, RBC Capital Markets’ head of global commodity strategy, in a recent note to clients. Back in the 2000s, armed militants in Nigeria’s oil-rich Niger Delta, including MEND, routinely kept hundreds of thousands of barrels of oil off the market.

At the height of its activity, MEND slashed Nigeria’s oil output by 50%, cost the government $19 million in daily defense outlays, and claimed an estimated 1,000 lives per year, according to data cited by RBC Capital Markets.

Some people in the Niger Delta felt exploited by the oil industry. In 2008, the  Economist wrote that MEND  “portrays itself as political organization that wants a greater share of Nigeria’s oil revenues to go to the impoverished region that sits atop the oil.”

So in 2009, the government decided to curtail the chaos and huge financial losses by signing an amnesty agreement and pledging to provide monthly cash payments and vocational training programs to the nearly 30,000 former militants in exchange for cooperation. S ome of the more influential members like Tompolo — who at one point topped Nigeria’s “most wanted” list — received some lucrative security contracts worth nearly $100 million per year.

The arrangement was a pretty good band-aid. However, it failed to address the fundamental drivers of instability in the region such as poverty, corruption, and the proliferation of weapons. “Moreover, crude theft and
other forms of criminality have continued at a large scale and many of the ex-militant leaders

who had received the largest payoffs from the government have been directly implicated,” wrote Croft.

And now,  Nigeria’s new government has been  axing expensive security contracts and issuing indictments for theft, fraud, and money laundering.

“The government appears to be on course fo a head on collision with armed militants in the oil region,” Croft wrote,  echoing comments she made in January .

The bigger picture here is that this “collision” could destabilize Nigeria’s oil production in the long term.

Already, about 15% of Nigeria’s crude output is offline, according to data cited by RBC Capital Markets. And the team believes this number could double in the coming months.

As Croft argued in the note:
“Even if there are no immediate plans for a MEND reunion tour, i.e. MEND 2.0, we would note that just a relatively small number of well-armed assailants can cause considerable chaos in Nigeria — reconstituting MEND in full force is not necessarily a requirement for Nigeria to be at significant risk.  This is especially the case if armed militants directly target energy facilities as western oil companies have shown a marked tendency to suspend operations when there is a threat to personnel and property… If this new wave of unrest spreads to onshore facilities, we could see a similar reduction in export volumes once again.”

Plus, even if the militants don’t target the facilities, there are several key pipelines at risk as well.

“Nigerian production has been slowly grinding lower over recent years, even absent acute outages due to natural declines, and this will be compounded over the next several years given the number of shelved projects,” Croft wrote as a closing statement.

“The significant risks posed by the political, security, and economic risks mounting only adds to these falls in production.”