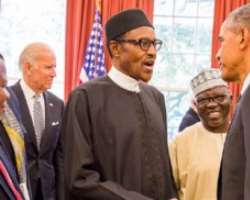 The United States and Nigeria on Wednesday agreed to establish working groups focused on strengthening security cooperation, the economy and tackling corruption after day-long talks at the State Department.

In a joint statement, the countries said the groups would come up with a paper within a month finalizing goals.

Kerry meets Nigerian President Muhammadu Buhari on Thursday on the sidelines of a two-day nuclear security summit in Washington involving leaders from more than 50 countries.

The meetings on Wednesday were launched by Kerry and Nigerian Foreign Minister Geoffrey Onyeama, who both acknowledged security challenges posed by Boko Haram militants in the northeast and neighboring countries, as well as tough economic times caused by a drop in oil prices.

Kerry said the United States was committed to helping Nigeria tackle the Boko Haram insurgency, although he cautioned that security forces had to avoid human rights abuses even as they stepped up the fight against the jihadi group, which has pledged allegiance to Islamic State.

“Under President Buhari, Nigeria has been taking the fight to Boko Haram and it has reduced Boko Haram’s capacity to launch full-scale attacks,” Kerry said, “however, the group still remains a threat, a serious threat, to the entire region.”

“Now, I want to be clear, this aid is predicated on the understanding that, even when countering a group as ruthless as Boko Haram, security forces have a duty to set the standard with respect to human rights,” he cautioned, adding: “One abuse does not excuse another.”

U.S. cooperation with Buhari’s predecessor, Goodluck Jonathan, had virtually ground to a halt because of his refusal to investigate corruption and human rights abuses by the Nigerian military.

On the economy, Kerry said the United States was “encouraged” by Buhari’s commitment to diversify Nigeria’s economy to make it less dependent on oil.

But Nigeria needed to create an environment that was welcoming to investment, Kerry added.

The joint statement made no mention Nigeria’s foreign exchange rate, which the United States complains is too rigid and discourages investors. Senior U.S. diplomats said the issue would be raised during Wednesday’s talks.

Africa’s top oil exporter is in the middle of an economic crisis as a slump in global oil prices has eroded public finances, hit the currency and dried up commercial banks’ dollar supplies needed for basic imports.