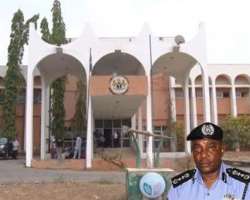 The Police, on Wednesday, sealed off premises of the Kogi State House of Assembly in line with the resolution of the National Assembly.

Lorry load of policemen were as early as 8.00 a.m. deployed on the premises with the gate locked against people, who may want to gain entrance.

The development, however, made the lawmakers in the camp of the factional Speaker, Umar Imam, to relocate to the Government House for the defence of budget by ministries and parastatals.

Although, the stern-looking policemen refused to give the detail of their presence at the gate of the premises, they, however, said they would not allow any of the members to gain access to the assembly.

But the factional Speaker said the assembly was never sealed off by any security agency.

He said members had, at their last sitting, adjourned till April 12, to enable the various committees engage in budget defence.

He said the members were not in the assembly and would not have been affected by the purported seal off of the premises, as they had been directed to continue with their oversight functions to aid good governance in the state.

Imam said: 'The last sitting we had was on the 24th of this month and we have adjourned till 12th of April, we did that to allow house committees to begin budget defence and we have slated that from today till April 11th for the committees to turn in their reports. So, the House had been on recess; no member will have anything to do with sitting, what we are doing now is part of oversight functions.

'The assembly is functional. If you go there now, you will find the staff of the assembly doing their work. So, no sealing off of the assembly. The policemen have always been present, it is a normal thing for police to be around.'

However, the Momoh Jimoh Lawal faction of the House described the action of the police as a welcome development, since the crisis remained unresolved, as earlier directive to return to status quo ante by the National Assembly was ignored by the five members who carried out the controversial impeachment.

The embattled Deputy Speaker, Ali Akuh, who spoke on behalf of the group, said it was an aberration for five out of the then 20 members of the assembly to impeach the Speaker on whom the remaining 15 members had passed a vote of confidence in his leadership.

'What happened with five members seeking to impeach a Speaker in a House of 20 members is an aberration, unheard of and more so, some members' names and signatures were forged and included as being part of them.

'We had to go to the higher authority which is the National Assembly vested with the constitutional powers to intervene in such situations. The House of Representatives ordered the seal-off and it was concurred by the Senate,' he said.

Efforts to speak with the Police Public Relations Officer (PPRO), Kogi State command, Williams Anya, were not fruitful, as he did not pick calls put through to his line.